I got round to assembling those Brave Knockoffs into thier giant gestault form. Not bad... Shame about the clash of colours but still something that stands high, dominant and mighty like all gestaults should :D 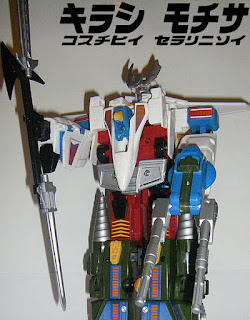 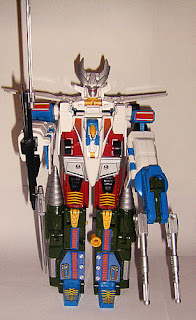 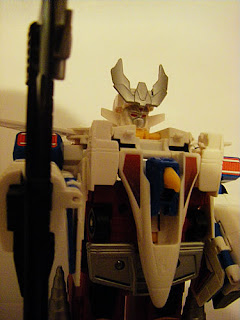 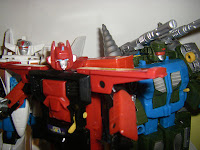 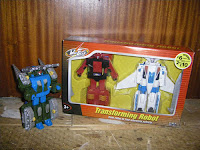 These rather splendid Brave Series knockoffs arrived in the post yesterday. For those who don’t know, Brave has been described as the spiritual successor to Transformers in Japan during the 90s. Anyone who liked the overall design of Transformers will like definitely like Brave.

These great counterfeit figures were found in Staples (yes the stationary store) by my good pal Phil Ayres (you can read his many TF reviews HERE). This knockoff is that of the character God Max. There is a combined form of all three of these toys for which I currently have no instructions for, however I’ll cover that in another entry.

Individually these are not bad. Each has a handheld weapon and the transformation is easy. Out of the three, the jet (Jet Max) is the least interesting and most generic looking, but he does play a part in this trio as a gestalt piece and flyboy. The other two, one (Dush Max) being a cool red sports car and the other (Drill Max) a drill tank (looking very like Killbaison and Drillhorn of Transformers: Victory, and possibly a homage) have an interesting chest weapon gimmick that is activated by a small lever on the hip area.

From this link HERE you can see the original toys and their combined form, the weapons also combine too make a double bladed sword.

There could be more Brave Knockoffs doing the rounds, and these 3 are probably the start. 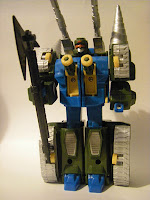 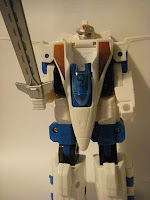