I was put up to doing this little skit on the Transmasters UK Hub (see links) to have a stab at doing a video toy review. Needless to say, things went pear-shaped and the whole thing was a car crash (literally!). I thought I'd put it here for you Figured Out readers to have some laughs at. Dig my accent!

This is the corner display on my desk area which changes now and again. The current setup features a whole cast of characters.

See who you can recognise ^_^. 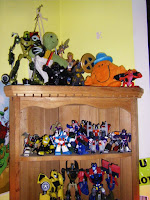 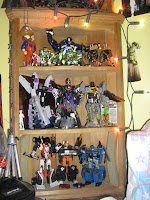 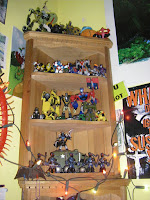 MY CHRISTMAS WITH ANIMATED SHOCKWAVE

So much to write about in regards to the recent festive season, and of the figure acquisitions I've made through friends, family, santa and myself saving boxed figures throughout October and November.

Sadly this entry is regarding hiccup with the rather excellent Shockwave toy from the Transformers: Animated line.

As I opened this figure and to my dismay, I found the lower legs which were folded in tank mode had both been snapped at the shin. 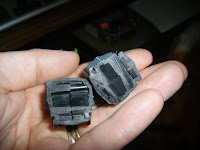 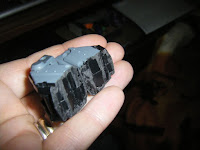 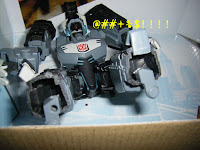 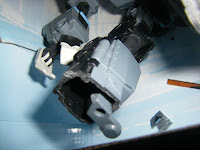 Judging from the breakage marks in the plastic, it seemed brittle to start with and this would'nt have been the first time a TF:A toy has gone 'Santa Claus: The Movie' on the general public. The usual isses with the animated line have been with loose parts and poor ball joints but this... is a nasty thing to find and I hope no kid who got this toy for Christmas did'nt receive a dud like this.

Aside from the problem, Shockwave seems like a great toy. I guess I can sell the remains on to someone who likes kitbashing and wants parts.

Still, the purple version of this toy is due for release later in 2009, so hopefully if I get this as a replacement it won't be a brittle nightmare.
Posted by: Hero_UK Posted: 01:06 No comments: