Here I have on my desk a recent acquisition of Hound from the Japanese Transformers: Henkei range.

For those who don’t know, Henkei is the Japanese version of Transformers: Universe - a toy-line of old Transformer toys updated into newer (and some improved) renditions. Takara’s take with this line is a bit different from Hasbro’s approach by boasting cartoon accurate colours, chrome parts and bundling a collector card with a mini comic to boot.

The original Hound toy from 1984 was a good quality figure with detail and die-cast parts. Here, this homage of the toy has stepped up from its predecessor by having a more posable robot mode, and bigger size scale (since the original was small for its size-class). 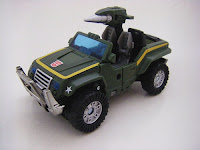 Hound’s Jeep mode is solid and holds together well; on top of that - it’s a proper disguise! (Just ignore the Autobot insignia on the hood). Looking under the jeep itself, any possible revealing robot parts are hidden away, which isn’t a common occurrence on car based Transformers toys. Henkei Hound could near-enough pass off as a regular toy jeep to those not TF literate.

The shade of green Hound is coloured in is the same dark military tone from the G1 cartoon, whereas the US Universe version is a lighter mushy peas-like contrast. This Japanese interpretation also sports more decoration such as military stars and a golden stripe to make good effect.

Hound’s transition to robot form folds out quite nicely. The transformation follows some similar dimensions as the original 80’s toy in the front bonnet folding down (obviously!), windshield folding behind, and the back cargo area folding out into legs (complete with blocky robot feet). The robot mode itself is very posable and just looks great! Hound’s robot head, robot face and baby blue optics are all just spot on and add to expression. 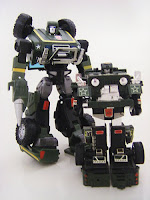 The end result of this Hound remake is a well executed fusion of cartoon and Generation toy homage rolled into one. To really look at the work of this design you really have to compare this figure in person with the old toy (which I have referred to 50 times now) and stills from the series.

Of course, Hound isn’t alone in this Henkei offering, as he is also accompanied by a new version of the Decepticon spy – Ravage!

Ravage is presented not as a tape, but more or less a black slab (probably a large suitcase) that can attach to the back of Hound’s jeep mode. As a bonus, Ravage’s tape/suitcase mode can also fit inside the chest compartment of Generation 1 Soundwave in true spy minion fashion. What stops this new Ravage being defined as a tape is that there isn’t any tape markings like the Generation 1 toy, and in comparison the alt mode is a ‘black folded up thing’.

Now, Ravage’s Jaguar mode is magic! This toy resembles the dog-like black cat from his appearance in the 80’s cartoon series well. The cat mode is obviously the more important aspect and this is executed brilliantly. - A lot less 2 dimensional than the G1 original in terms of being ‘Ravage’.

Henkei Hound with the addition of Ravage is like a pseudo VS set. Both toys are either something that can be displayed opposing each another or burying the hatchet in each alt mode, with the option to attach Ravage onto Hound’s jeep mode to grab a ride. The play or display value of this package deal is certainly a winning combination and a highly recommended purchase for kids and collectors alike. 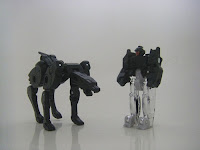