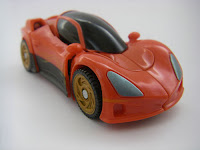 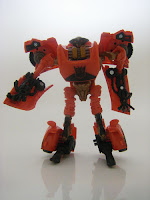 This Decepticon looks Fast as a car and Furious as a robot. Altogether - an all-round nasty Stunticon namesake for the Autobots to contend with.

Dead End here is part of a new scout class of movie style Transformers featuring what looks to be characters that may not appear in the motion picture. Going by past Movie toys, Dead End could be suggestively connected with the film like other non-cast member toys before him.

Transformation from car to robot and vice versa requires careful handling and patience as there are small parts that can break off easily (such as the front bonnet). Like a lot of smaller Transformer toys before, this figure has a lever like hinge on its back which pulls the roof or equivalent over the head in alt mode. This feature is like the G2 Cyberjets and small wave 1 Beast Wars, but Dead End is no way a ‘Shellformer’ like these are since other parts on him are less static and need further transforming.

The street racing car alt mode is a solid red & black, curvaceous sports car - much like the old early-90s Aquaspeeder toy Deluge. The car pushes along nicely as it should, and the doors each have a decorative orange tribal flame to make Dead End look more like a bad-boy racer. The hub caps also have tribal like markings too. Road rage could indeed take to the living room carpet in style.

What is most striking about the robot mode is the amount of movement in the joints. Even the robot head which looks ‘Thanagarian’ has a moveable beak like mouth and a bottom set of sharp teeth. The legs on Dead End have 6 articulation points, whilst the arms are ball jointed on the shoulders, elbows and wrists. The robot hands are each sculpted as an open set of clawing fingers (although a little fragile) rather than a set of block fists. There is a peg-hole in each palm maybe for an optional weapon, even though Dead End is unarmed.

This is a fantastic figure with attention to detail and lots of articulation for a Transformer its size. However, Dead End is let down by being a little fragile in places and needs delicacy when transforming. This toy is more for displaying rather than playing, especially where the robot mode is concerned. A Scout-sized spectacle! 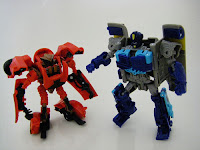 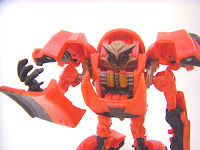 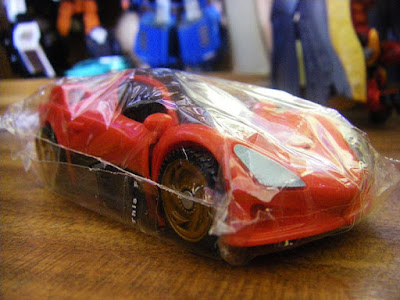