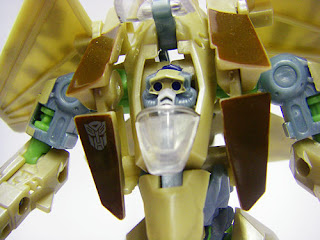 Joining the Autobots from the skies is Top-Gun flyboy Breakaway. Breakaway is part of the first wave of movie sequel toys and appears as a playable character in Activision’s Transformers: Revenge of the Fallen video game. The character name was also used for a chocolate biscuit brand in the 80’s, which I often had in my packed lunch for school.

Breakaway moonlights as a desert camo-coloured military jet with cybergliphics marked on the wings and tail. The jet looks sleek, and compact; and it holds together well. The jet can also be folded out into a Veritech style gerwalk mode, but it is not an official conversion.

Breakaway is easily comparable with different generations of jet-based transformers toys in the way this figure is designed and how it transforms. The robot form however is a slightly different take on a ‘jetformer’, although different concepts from past moulds are given a nod to, almost like a bricolage as it were. 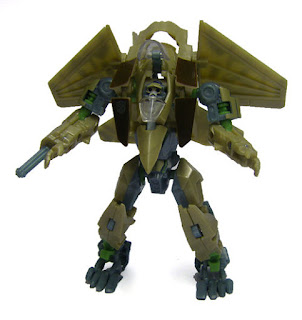 In robot mode Breakaway most notably has his robot head exposed from within the cockpit of the jet. The window hatch can be lifted up to reveal the robot face or can remain down like a protective screen. The robot face itself is almost like a mixture of flying goggles and an oxygen mask both adding to the jetfighter theme of this figure. As an extra feature, Breakaway has a narrow Gatling gun over his forearm, much like a G1 seeker weapon. The Gatling gun can rotate via the Mech Alive gimmick but isn’t anything special. On the walking side of things Breakaway’s feet boast a set of 4 toes on each. Rather than the ‘norm’ of having square or triangular feet, Breakaway shows that Transformers can have toes too, especially since they have had fingers in most designs. 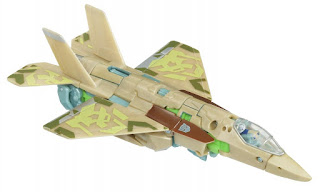 Like with other past jetformers, the craft wings also double up for use in robot mode. For Breakaway, his wings and tail make up a small hang-glider like formation on his back.

A slight downside on this toy for me is the colour scheme. The primary desert storm shade is fine but the chav blue and wasabi green in places don’t blend in at all. In fact, they insultingly clash towards a well designed toy mould. This toy did not adopt a G2 Aerialbot scheme, but this is still unforgiveable.

On the brighter side, there is said to be a darker variant of the toy available as well as upcoming Thrust and Dirge repaints. If like me you don’t like the Breakaway mould with wasabi on the side, there are other fruity flavours on the horizon.

Overall, Breakaway is a decent figure with a different innovative approach to a robot mode. Got to love those toes! The choices of secondary and tertiary colours are indeed bad, but they don’t entirely ruin what is a fun and novel figure. 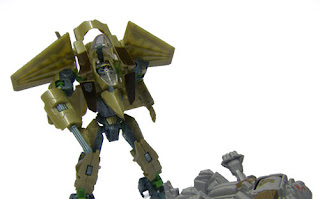