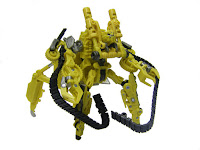 One of the outstanding disguise themes the Revenge of the Fallen movie and toyline both offer is that of the Constructicons. Or rather construction vehicle themed Transformers under the Bayformer design. These so-called Constructicon toys are packaged as normal Decepticons without the additional fanfare to say they are a special unit.

Alongside Demolishor, the other construction vehicle to crop up in the first wave of movie sequel toys is Rampage.

Rampage in toy form is a warm-yellow bulldozer and somewhat flung from his coloured red movie appearance. Resemblance good or not, Rampage is actually very cool. Much like his unicycle-like comrade Demolishor this Transformer has a different take on a robot mode.

Escaping from the traditional norms of a humanoid robot form for a Transformer, Rampage has four legs. With this approach and proportion, Rampage could possibly be some kind of centaur or maybe an Andelite (ref: Animorphs). What also stands out on Rampage are his bulldozer treads which drape down each arm like extra-long coat sleeves. These ‘coat sleeves’ both mark for a pair of deadly whip like combat weapons. The toy based on Rampage’s Beast Wars namesake also has a rubber treads from claws feature, but was never used like this. It would seem that with the Revenge of the Fallen toyline most weapons are already attached to the Transformer robot (i.e Sideswipe, Breakaway etc) and Rampage with his ambidextrous tread whips is no exception.

The bulldozer mode is tough and sturdy the way it should be. This vehicle form is also detailed and moulded well to attention. There’s nothing more to comment on apart from this mode doing its job looking like a bulldozer and a well made one at that. The bulldozer parts all play their part in making up the deadly robot mode when folded out into robot form.

Rampage with his four legs can be difficult to stand. This is because the legs are thin and hoof like. Sometimes either of the two front legs don’t stay stood up properly making this figure feel slightly table like. This is one of the traits of this toy that requires a bit of patience.

So what, this version of Rampage isn’t a gestalt limb? This building site badboy also has a third mode in his arsenal. This additional mode is a jackhammer drill and possibly scale wise useable with bigger figures to handle, since it won’t stand alone. Unlike the bulldozer form, the jackhammer looks less like an Earth-based power tool and more like a Vehicon hover mode. Having both alien and Earth based alt modes, is something that hasn’t been done before with the Triple Changers concept as far as I am aware.

In conclusion, Rampage may not be movie accurate in appearance but is a decent enough construction vehicle Transformer with a little extra wow factor and originality. Rampage’s different quirks make him quite novel and outstanding compared to most deluxe sized figures. All round this is a fun toy to own if you can tolerate its occasional baby deer like standing problems. One figure not to be missed. 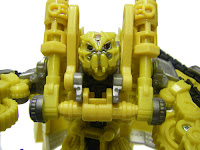 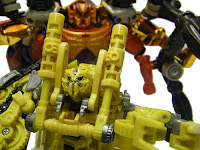