The Decepticons have never had a proper equivalent to Ratchet in Transformers lore. Sure, there have been some brainy and creative Decepticons but never an individual character that suits the theme of a surgeon. Tarantulas maybe?

Along comes this new character Scalpel, a character from Transformers: Revenge of the Fallen which has filled this gap.

Unlike Ratchet, this evil medic changes into a surgeon microscope rather than a themed vehicle. This marks for some interesting appeal in toy form, as there are a low ratio of appliance based Transformers. Real Gear is back! (sort of).

What also adds to Scalpel’s originality is his robot form – A 6 legged bug like creature with the posture of the Modulok toy from Masters of the Universe. Revenge of the Fallen has not only introduced newer alt-mode concepts but a different approach to robot modes too. Scalpel is a good example of this.

With his bug-like appearance, Scalpel is probably the smallest in toy form and on-screen of the Decepticons.

Scalpel’s character: He’s a clever little robot who collects data and lots of it! Easily a 10 for Intelligence on the Tech Specs scale, although lacking in re-assembling skills. Scalpel is known to take things apart and put them back together with a few things missing. “Decepticons prefer to suffer in silence rather than allow Scalpel to work on them”.

At first, Scalpel will greet the consumer in robot mode as that is how all the scout class figures are packaged. This unfortunately meets with the primary problem with this figure early on as all 6 insect-like legs are very brittle and can snap easily. Not only are the legs very fragile, they also prevent Scalpel from standing properly in the way the illustration shows on the back of the packaging. That also introduces a bit of a trading standards issue if I cared enough. The flaw with the legs lets this figure down a great deal as transforming into alt-mode requires very careful handling.

Scalpels other features in robot mode are not so bad. The robot head and face are quite amusing with its goggle-eyes and a cute antenna. The robot arms are very tiny and equally thin as the upper legs, but a lot tougher! The upper torso on Scalpel has some cool purple coloured circuit-board markings that add a bit of depth into the design.

On the plus-side, Scalpel’s alt mode is amusing and more compact. Fold up the legs inside as well as the tiny arms etc and you have an amusing microscope. Of course you have to guess how this toy transforms as the scout-class figures are not equipped with instructions. (That’s part of the fun though). The microscope is articulated well and is kind of like the iconic Pixar desk lamp. Escaping from the unstable robot mode is rewarding.

Doctor Scalpel is a fun, gimmicky and original concept to a Transformers design. Sadly the toy has majorly tripped up and stumbled by its fragile parts. Definitely a purchase for collectors rather than kids, and one for displaying only! 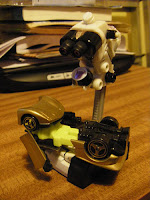 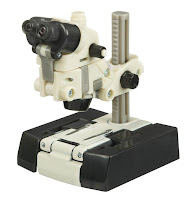 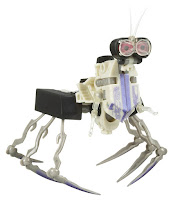