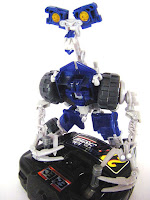 A renowned name in Transformers lore, Wheelie was originally depicted as an attention seeking Dennis Mitchell type character of the later Generation 1 era. In the new live action backdrop Wheelie’s namesake is a small little blue Minicon like robot. Wheelie is a spy because of his obvious size and with that objective his Earth alt mode is a remote control Monster Truck, ideal for hiding in garages and households. This new version of Wheelie seeks acceptance whether it is with the right or wrong crowd, but it makes for an interesting story arc where the little guy proves how useful he can be.

In unique irony this toy has the vehicle mode of a toy. Alongside the Ice-Cream van twins and Ejector the toaster from Revenge of the Fallen, this is probably another first for Transformers disguises.

As a robot, Wheelie resembles something from Robotix crossed with bits of Wall-E and Short Circuit’s Johnny 5. The wheeled legs, big eyes and rectangular head make for an amusing design that isn’t taken too seriously. I guess the concept with Wheelies design was to draw themes from Johnny 5 and Wall E and size him down as an underdog or potential runt of the litter. 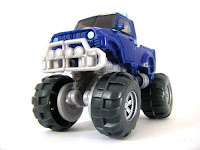 Like with the toy rendition of Scorponok, Wheelie is represented in a scale compared to other figures much larger than he should be. In a good way it means that the quality of the toy can have more attention paid to it. Given the fragile issues with some Scout-class toys (ref: my reviews of Scalpel and Dead End) Wheelie is definitely best off as a Deluxe figure.

In packaging, Wheelie is already in robot form. The robot mode is supported by what I could best describe as dual kickstands based around the inner ankles. These kickstands help Wheelie with standing as both his robot feet are basically Bigfoot truck tyres. Wheelies arms are both thin and lengthy like that of Johnny Five with two long articulated fingers and a thumb. This is a nice touch to a Transformers toy considering a majority of figures possess the traditional square hands design with a peghole. Wheelie has freedom of movement with his hands which can be used to grip around other objects, and it kind of makes up for the omission of a weapon.

Probably, the only gripe I have about Wheelie is the weak colour scheme. The blue shades are fine, but I think the grey parts the arms, neck and other pieces are coloured in could have been more chrome like to give this toy more depth. Apart from the eyes and insignias, Wheelie has a basic palette of three colours and that’s it! Limited colour shades don’t do Bayformer-based designs enough justice in my opinion. Perhaps a possible later premium edition of this toy will rectify this. 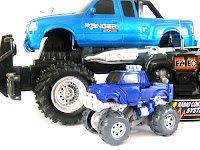 The most outstanding gimmick on Wheelie is the changeable insignia on his chest, which puts across his character as a bit of a double agent depending which way the wind blows. Both the Autobot and Decepticon insignias are coloured in traditional red and purple rather than grey or black. The gimmick is a workable change from Mech Alive or leg humping action (see movie). 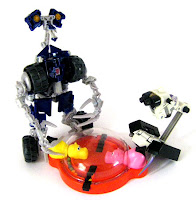 Another distinctive feature is the movable eye plates that make up the shape of Wheelie’s head. These plates can pose either up or down to make the toy look all the more expressive, much like the character in the film. 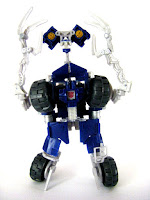 Wheelie in truck mode is just plain cute. The arms and everything else tuck in tidily and snap into place to make up a compact playable toy truck. The truck doesn’t do anything else except for be a toy truck of a toy truck (no missiles, gimmicks etc) and it serves purpose just being that.

In conclusion: Wheelie is a character toy that will likely go down well with younger Transfans, anyone with toolbox space or in general those who found his movie appearance funny. Like with Skids and Mudflap, Wheelie seems to be an acquired character taste. The limited colour palette is but a small gripe, but design wise this movie character has adapted to toy form quite well. This toy could have been a whole lot worse, but it scrapes by into OK territory just fine.
Posted by: Hero_UK Posted: 12:19

Email ThisBlogThis!Share to TwitterShare to FacebookShare to Pinterest
Labels::: reviews, Transformers. Revenge of the Fallen