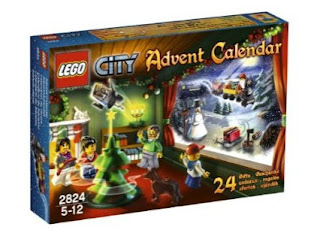 On my local high-street travels I normally pop into the local Entertainer to see whats in and whether the same old Transformers stuff is still shelf warming. Monday, I did just that… And I saw – It!

In the front display was the 2010 Lego Advent Calendar (City ver). I was pleased to see it, especially as I bought the previous 2009 edition.

What came to a letdown was the price hike from £20 to £28. The majority of 30 pounds sterling for an advent calendar is ridiculous! £20 was expensive enough.

I went home wondering if I could get a more affordable Calendar from somewhere else online. Amazon came up with the goods at £21 and they had pictures of the toys hidden behind the doors.

For a start, there are 6 mini-figures (instead of 9 like last year) and some of the toys are ‘toys’ of toys if that makes sense.

The theme this year is predominantly an internal Christmas scene where everything is indoors (cept for the snowman of course). There’s a Fireplace, Instruments, Pets, scaled down Lego vehicles as ‘toys’ and other weird objects. The indoor skateboard ramp is a pretty cool touch and maybe something Bam Margera would approve of.

Compared to the line-up from last year, this selection is a little watered down in comparison. 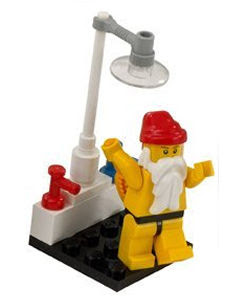 Of course, I also stumbled upon something in the set which has been on the lips of Lego collectors for the last few months, the obscurity that is - ‘Naked Santa!’.

I could not believe my eyes at the discovery! - Complete with a shower unit (minus the curtain) and what looks to be a ‘thong’ wearing Father Christmas. Why!?

The point behind this or the play-value it adds to a child’s Lego collection is anybody’s guess (?). This is actually one of two Santas in the set, as there is a fully clothed variant too which is illustrated on the box riding the indoor ‘train’ set.

The plot has been lost somewhere, but 'streaker' Santa could end up a very collectable figure. Is that also enough to justify £28 for an advent calendar? - You decide and have a chuckle!
Posted by: Hero_UK Posted: 00:10