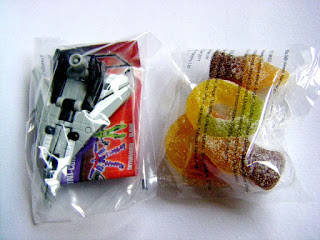 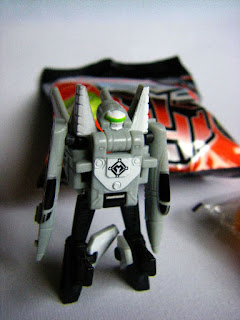 ‘Blind bags’ are becoming quite a toy trend. The hugely successful Lego Minifigures are now in their 2nd series (with a 3rd on the way), Halo has an assortment, Crazy Bones have been around a while - and now Transformers are getting in on the act!

Transformers: Universe blind packs have been spotted in The Entertainer, featuring a series of 12 Minicons to collect. On top of that, the packs also have sweets (or Energon Fizzy Jellies as stated on the packet).

These Minicons themselves have been on the toy shelves before as a 12 pack set exclusive to Woolworths (and later on in Poundstretcher). The 12 bots have now been split up and re-released in ‘blindbags’.

For those who missed out the first time, the mystery 12 includes; (Autobots) Backstop, Heavytread, Bodyblock, Makeshift, Flatfoot and Knockdown, (Decepticons) Supressor, Cloudraker, Boltflash (pictured), Brimstome, Skyhammer and Blight. An included collector leaflet shows the collection (pictured). As you can also see, the minicon 12 on either faction side are christened with some very amusing names.

So what are the ‘Energon Fizzy Jellies’ like? They are basically a couple of cola bottles and fizzy rings (that’s it). They must be very cunningly disguised to look less Energon-like. Still, it is an extra value inclusion, even if they are penny chews. They are as always delicious!

Like with most mystery pack toys, these are a pocket money assortment at £2 a go. They are also potentially great stocking fillers with Christmas just around the corner.

Hopefully there could be another series of these, but preferably original releases. If you missed out on the Woolworths 12 pack these tiny Transformers would be worth hunting down. 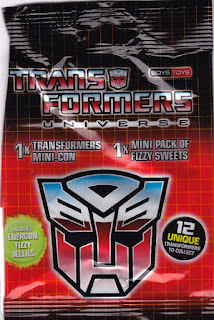