Back in 2009 there was this amazingly ambient, artistic and explosive show called Sentai Samurai Shinkenger. The Sentai team of that year and into early 2010 were given a Samurai theme with a ton of Japanese cultural overtones.

Everything about that Sentai show was bliss and right; the gattai, the designs, the characters and stories etc. And best of all it was so quintessentially Japanese it was untouchable by western translation. (Or so I thought...)

An announcement came Summer of this year that Power Rangers was making a comeback in 2011 as 'Power Rangers: Samurai'. Oh dear...

Recentley Bandai unveiled pictures of the toys based on the show, and like the western dubs - these were lost in translation too. Non-show accurate toys for anything had just about got by in the 80's, but these days its inexcusable. 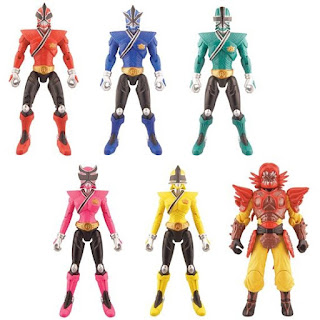 Again Bandai have laughably exaggerated the builds of the characters (the girls too) and made them look 'roided'.

I have not seen the cast for 'Samurai' yet, but I am guessing a few ex-Neighbours and Home & Away actors may be in the line-up. Still worth a chuckle on a rainy day.

Ta to Paul 'Logan Blaze' Anderson for the heads up.
Posted by: Hero_UK Posted: 18:16