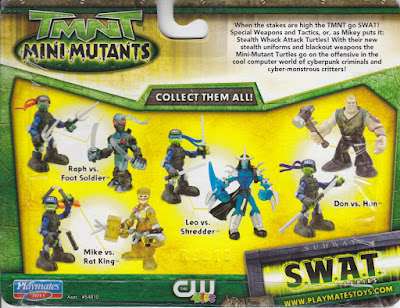 Thanks to my hombre Bogatan I recentley have come into a set of SWAT TMNT (Stealth Whack Attack Turtles!).

This wave of TMNT Mini Mutants was never released stateside, but they have surfaced in UK poundshops and in Australia.

The motif with this wave is simply TMNT dressed up in SWAT gear (Black Jumpsuit, Extreme Sports and Paleo Patrol all previously done). These SWAT TMNT are paired up against translucent jello repaints of previously released villain figures - Shredder, Rat King, Foot Tech Ninja and Hun.

For now I have posted a scan of the card packaging. More on these again in a later blog entry...
Posted by: Hero_UK Posted: 02:02