By chance I caught up with the original Filmation He Man episode 'Battlecat' to have a sneaky peak at Battle Cat/Cringer's origin story. A great tale of friendship, an ingredient I feel that a lot of todays shows and cartoons greatly lack.

I owned the original Mattel toy back in 1984 and even though it was a limited representation of the big-bad kitty it was still a cool toy to display all the same. It completed owning a He-Man figure.

Battle Cat was awesome to watch on screen whether he was baddie bashing as the big cat or scared of his own shadow as the kitten. I must admit that I liked the non-talking 2002 take on the character a bit better.

I've always wondered how much of a disguise Battle Cat is to Cringer. Surely green and yellow tigers on Eternia are not that common. Even with the cool saddle and mask, Battle Cat still looks like a roided up version of his other identity. They certainly are two different personalities in a Jekyll and Hyde kind of way. Hopefully if a newer He-Man series arises there will be more exploration regarding He-Man's colour-clashing steed.

Tony, Tigger and Raja have nothing on this king of the Tigers. He's Grrrreaat! 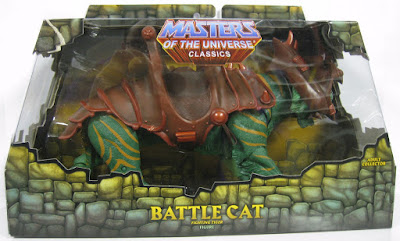 Email ThisBlogThis!Share to TwitterShare to FacebookShare to Pinterest
Labels::: He-Man, Masters of the Universe, Mattel