On a recent trip to Toys R Us with my daughter I stumbled upon a small display with some of the new Dark of the Moon Transformers line (there was either a few in stock or they were selling rapidly!). The main Transformers aisle at this point was still shelf and peg warming figures from Revenge of the Fallen (which is kind of embarrassing).

The first toy I picked up was Roadbuster, a namesake from the Wreckers group of Marvel G1 comic lore who also appears in the new Dark of the Moon Transformers film incidentally as a Wrecker! This new Roadbuster moonlights as a primarily dark green Chevrolet NASCAR stock racer decorated in sponsor labels from Amp Energy/National Guard and obviously draws no resemblance from the G1 toy.

The overall impressions of the alt mode shows that Roadbuster is culturally a very Americanised figure, which is what you’d expect from a Michael Bay driven Transformers product. The car itself is based on the actual #88 racer driven by Dale Earnhardt Jnr.

Of course, Roadbuster (joined by Topspin and Leadfoot) is one of a trio of these stock racers that also double up as mini-tanks (a fantasy idea from director Michael Bay perhaps?). Each of the Wreckers in Dark of the Moon has the capacity to mount a weapon on the roof or hood of their alt-mode for some Wacky Races action.

Roadbuster very cleverly has a push-down peghole to attach his Mech-Tech weapon into. In fact he has three of these with two located on each door panel and the third on the roof. This means that the attachable Mech-Tech weapon – a blaster that can transform into a chainsaw can be used in six different ways with three in each mode. 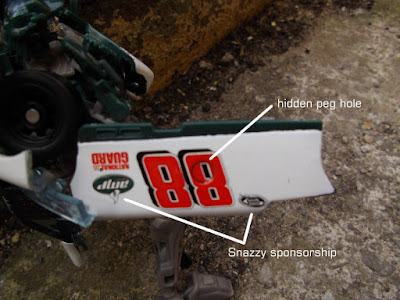 Since the door-panels on Roadbuster also become his arms, the chainsaw/blaster has ambidextrous usage. The roof of the stock racer becomes the back of the robot mode which means the weapon can be stored.

The chainsaw/blaster is terrific and I think it’s the first time a Transformer in the plastic has wielded a chainsaw of somekind. The only gripe I have is that the illustration on the back of the card deceptively shows that the chainsaw stays on its own. The chainsaw only stays as a chainsaw if the trigger is continually pressed down; otherwise it flips back into a gun again. There is no clip or anything that makes the chainsaw stay on its own despite what the packaging shows.

Roadbuster also has foldout static missile launchers over his robot mode shoulders, very similar to the fold out speakers featured on Reveal The Shield Jazz. A novel additional feature to the design. 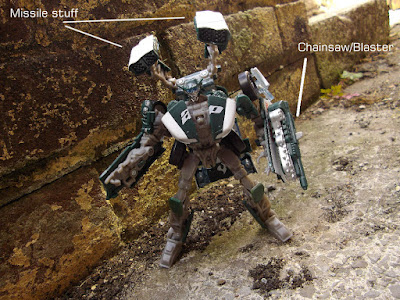 Transforming Roadbuster from vehicle to robot is not very fiddly at all. In fact the robot folds out quite easily and is good for those who don’t want a Rubik’s cube level figure to change between modes all the time. Another plus-point for me is that Roadbuster can stand properly. I found a lot of the figures from the previous Movie-based Transformers series had standing issues (Sideways, Sideswipe, Dead-End, Wheelie etc) and I am hoping that issues is fixed for all the toys from Dark of the Moon.

The robot mode stands great although like with most Movie Transformers this is where the weak side of the paintjob shows. Lots of dull grey in a lot of areas that could do with a touch of silver Warhammer paint and other crooked features, but that’s a Bayformer for you! 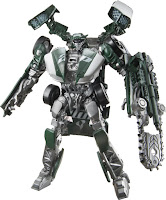 Interestingly, the headsculpt gives an impression that Roadbuster has some sort of a truckers cap on and what looks like a flow of metallic stripped hair coming down the back. If you can think back to the geriatric Jetfire’s beard from the previous Transformers flick you’ll see what I mean. Whilst the concept of Transformers having hair of somekind is novel, it should stay that vague. Any further with the hair idea and things could delve deeper into My Little Pony territory. Can’t have that now! :D

I currently have no basis for comparison since Roadbuster is the first Dark of the Moon based figure I have in hand, but I can certainly say if you like Deluxe assortment sized Transformers Roadbuster is a good toy to start out with. Since he is one of a trio it does make me want to see what his comrades Leadfoot and Topspin are like. This toy is a great effort from Hasbro despite the misleading packaging error with the primary weapon. Also a great figure for racing enthusiasts and anyone that just loves American culture. Wreck and Rule!
Posted by: Hero_UK Posted: 15:58