For the record, I’ve never properly owned the previous larger Starscream toys from the past two movie toylines. The Wal-Mart Skywarp retool is as close as I have got.

Now, movie Starscream has become available in the deluxe size class assortment of Transformers figures and it is a first. Still resembling that of a possible lovechild between Waspinator and Blot of Transformers lore, this Starscream is differently proportioned and narrower than previous offerings. Plus, he’s got all-new Mech Tech power at his disposal. It is indeed Mighty!

The most striking first-impression feature about Starscream is the packaged F22 Raptor altmode tattooed all over in cyberglyphics. This concept certainly adds more depth to look at and makes the toy look interesting.

The F22 Raptor jet is stable and appears solid. Everything holds together suitably too. Transforming from jet to robot is not a complicated transition, with a few things folding out here and there in the right areas. Kids should find this a doddle! 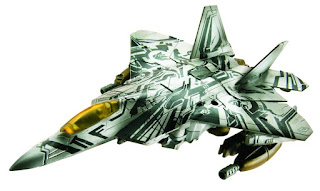 The transformation is also tidy, with pieces tucking in and supporting the robot mode without hassle. There is a possibility the designers of this toy took some reference or ideas from the Classics/Generations Starscream toy and used them structurally. This is the vibe I get from it anyway. 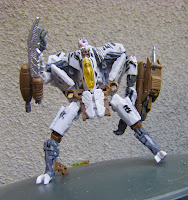 The robot mode stands firm, even though Starscream retains the chicken-legs look from the past two movie designs. The returning gangly arms are also very sturdy, and oddly enough the hands each have two thumbs moulded in. This might have been a design idea I’ve missed before. Starscream is well articulated and stands up satisfactorily with no topple down trouble at all.

My continued criticism of Movie-based Transformers toy having badly painted robot modes is less harsh with this figure. The headsculpt could do with a bit more colour, but the rest of the figure gets by, unlike the previously reviewed Roadbuster. Starscream doesn’t suffer from being one solid colour in most areas, and even with a limited palette the shades of brown, beige and grey are tactfully spread out. 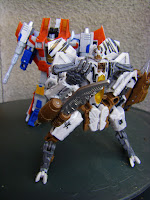 The MechTech weapon for Starscream is like a duel-bladed bayonet and is almost a nod to the weapon/s carried by the Energon incarnation of the character. The bayonet is made up of two separate weapons that can be handled on either of Starscream’s forearms or tucked under the wings of his jet-mode. One half is an arm gauntlet blade and the other is a cannon with the second blade concealed. The second blade springs out for action when both arm weapons are joined together. The combined weapon appears mighty and makes Screamer look the business and ready for combat! Best yet, the Mechtech weapon does not require continuous pressing down on the trigger to stay transformed.


If Deluxe-class Transformers are in your price-range this is certainly one to pick up, especially if you also have an acquired taste for Starscream’s 'Bayformer' design.
Posted by: Hero_UK Posted: 00:02