I came across this small set of Christmas Playmobil figures in Toys R Us and impulse bought them. As you can see from the photos they have a certain charm about them. This small set is one of many for the current Playmobil Christmas promotion (including Nativity sets and so forth), and I have to say it blows this years lack of seasonal Lego offerings out of the frosty water. 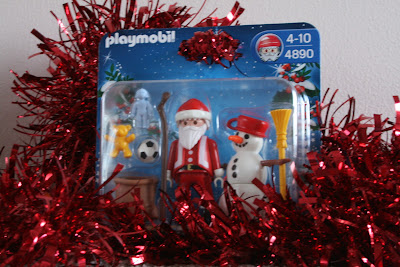 Pack Includes: ‘Skinny’ Santa w/Moses staff, bag of toys (football, doll and bear) and Snowman pal w/broom.
Santa is thin! Perhaps he’s a villager dressed up as the jolly man ready to do a grotto. Santa’s also brought his Snowman pal complete with a broom, branch-like arms and a saucepan hat. Snowman’s carrot nose is also bendy and adds extra amusement. In short both main figures are great!

The accessories are also great! I’ve no idea why this Slimline St Nick is equipped with a Moses staff, but it seems to work. The toy sack does what its meant to do and helps keep the smaller toy accessories in one place. The teddy bear can stand alone and almost acts like a bonus 3rd figure, unlike the doll. The doll however bears a slight resemblance to Buck Rodgers character – Twiki, giving it some credential at least. The football rather than being round is designed cleverly with many flat surfaces giving it the means to stay still instead of rolling away.

For £5.99 the cost is spread out across two really cool figures and some amusing accessories. The set could be described as a mini-grotto of sorts, with the rest left to the imagination of the kid owning it. I can see this integrating easily into an already existing collection of Playmobil toys. Best 6 pounds you’ll ever spend whether its Christmas or not. 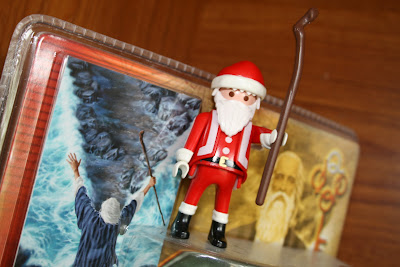 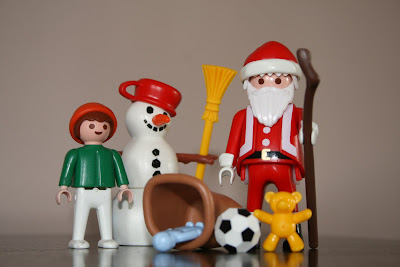