In the year 2001, Toy Biz launched its Spider-Man Classics line, which lasted for two waves. These figures would pave the way for Toy Biz's Marvel Legends line in terms of attention to detail and articulation. With that in mind, when I got the figure -- which was a KB Toys exclusive -- a couple years ago, I was impressed with the figure's articulation, which I will talk about some more. I was used to the Spider-Man and X-Men figures that were based off the cartoons and didn't have as much poseability, so the Spidey 2099 figure made a wonderful addition to my collection. Plus, every Spider-Man Classics figure came with a comic book and a display base, which to me meant that Toy Biz gave more than was expected, which carried over into its Marvel Legends line.

For those who are not familiar with Spider-Man 2099, basically the story goes that a geneticist named Miguel O'Hara tried to recreate the abilities of the original Spider-Man in others. What ends up happening, however, is that in the process of recreating the original Spider-Man's abilities, an accident occurs and causes O'Hara's DNA to be re-written with a spider's genetic code. Anyway, onto the review...

Spider-Man 2099 is a great sculpt. Toy Biz made the figure as comic accurate as possible without overdoing it. I like how the details -- such as the muscle folds on the back -- aren't just drawn on. In fact, it looks like they have a bit of depth. For the most part, the sculpt is simple but effective. 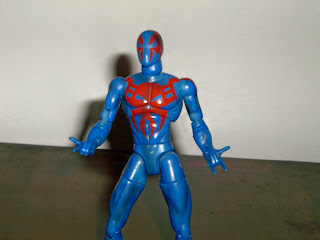 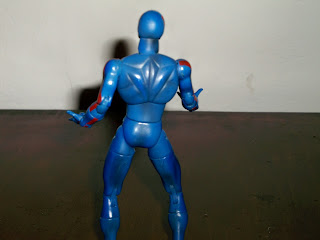 The paint on this figure looks pretty good and I like the fact that there's dark paint utilized, such as the above picture shows. That gives the figure more of a gritty look and without that paint, the figure would've looked bland. My only gripe is that in some areas, the paint looks like it either got chipped off or a different kind of blue was utilized to cover up a mistake. Either way, it looks inconsistent and out of place. 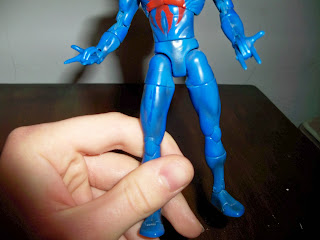 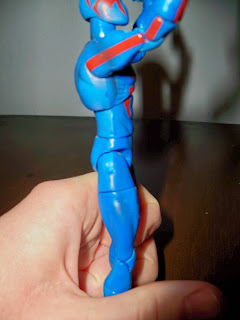 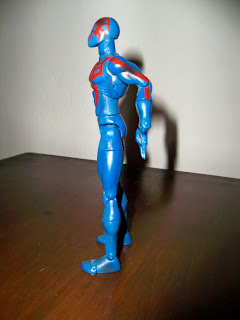 From what I gather, the figure has thirty points of articulation...


Taking into account what Toy Biz was able to do in terms of articulation, since Toy Biz had its limits, I think the articulation is still pretty good by today's standards. I imagine I could up with a few poses for the figure if I really took my time. I can see how indivdually jointed fingers would have worked, for example, but for the sake of the figure being a Spider-Man figure, I don't mind the fact that only the two middle fingers are artciulated because I pretty much have the figure looking like he's about to shoot out some web anyway. 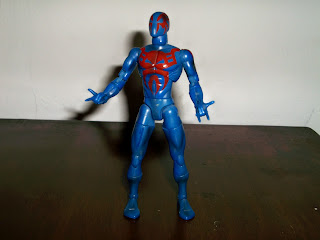 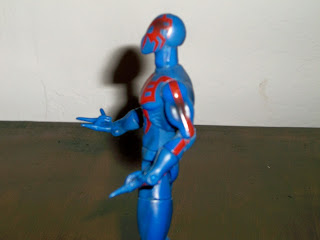 The figure comes with a display base and a reprint of Spider-Man 2099 #1. The display base is a portion of a brick wall with graffiti on it that reads "Spidey was here." Aside from that, the display base has a lot of nice detail, most notably the cracks in the bricks. There is also an optional waist clip which can be attached to the base for the purpose of mounting the figure to a wall. The waist clip allows for the figure to be positioned either up or down, left or right, or diagonally. On the back of the base, there is a peg hole so the figure can be mounted to a wall, which is what I'll probably do. 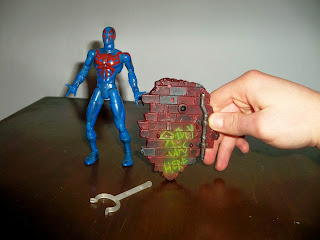 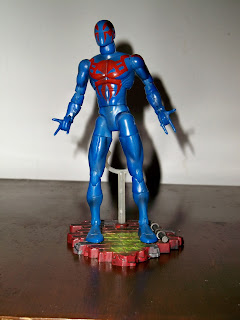 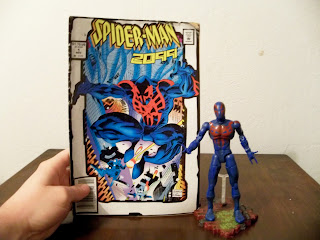 This is a figure that I would highly recommend, especially if you're into Spider-Man and are looking to up a figure or two from the Classics line. The figure can be found on either Amazon or eBay, but if you prefer to look elsewhere, check your local comics shop or any toy show or comic conventions in your area. From what I gather, the online stores seem to be the most expensive.
Posted by: americanzero Posted: 07:53