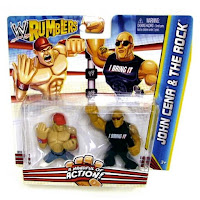 The Rock is wearing sunglasses (like in his ring entrance) and holding a microphone. The sunglasses themselves are possibly there as a coverup for the lack of likeness to Dwayne Johnson. The Rock’s large left side tattoo is also completely missing, whilst the Brahma Bull emblem on his right arm remains intact. John Cena’s resemblance however, has not been held back in translation.

It is not so much this set, but my issue with Rumbler ‘toys’ in general. Each Rumbler is annoyingly stuck in a pose and is better off a desktop model or ornament - rather than the action figures they are marketed as.

So, whether you’re aligned with Team Cena or Team Rock I’m sure there’s some novel value in owning this pint sized faceoff, just nothing special.