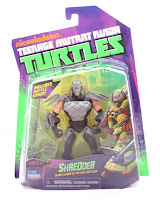 I was really pleased to come into possession of a Nickelodeon Shredder in the early draft of the 2012 TMNT toys release. These toys were hard to come by to say the least!
Being the most notorious antagonist of Splinter and the TMNT, Shredder is an important character to be done right in the plastic. Whatever the interpretation, Shredder has to look the business! Nick Shredder delivers on most aspects!

This Shredder based on the Nickelodeon show succeeds in being a subtle blend of being sharp and pointy, but looks like he can move about freely. Scale-wise, he stands taller than the 4 Turtles as he should do and is not physically over exaggerated. Oroku Saki stands tall, strong and unrestricted - unlike the static battle poses some past Shredder toys have suffered from.

Arsenal-wise: Shredder is equipped with a nifty looking Katana which the figure can hold with authority. The other 2 items are a pair of small 8-pronged throwing stars that could easily end up inside a vaccum bag if not careful! The main 'arsenal' of course is Shredders moulded on armour, featuring his usual arm/shoulder/leg blades and scary helmet. The dragon scale motif chest plate is what defines this Shredder different from past incarnations. 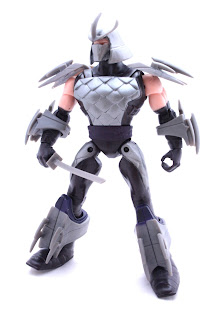 Sadly, this Shredder is let down by a couple of design flaws and choices. Firstly the figure has no articulation in the knees like the Turtle brothers do, but he does have a swivel-waist!. Secondly the colours lack in places such as strapping on the back and in particular – the eyes! Shredder's illustration on the packaging shows he has a major case of 'pink eye' or otherwise lost an eye from a previous battle. The toy does not replicate this for whatever reason, and he is instead represented with clear white eyes with faint pupils which otherwise could have been coloured in. The white eyes do let the figure down when viewed from particular angles, because they just don't stand out very well.

The colour-scheme overall for Nick Shredder has strong points, in that he bears more of a real world palette. The very dark brown/purple work well and help show up depth in the design. This is less lazy than going down the clichéd black route. The grim-penny coloured armour is also an excellent choice and puts across a great dirty metal look. Certainly a milestone achievement since the original skinny, 'bare-chested', blue armoured Shredder release from Playmates. 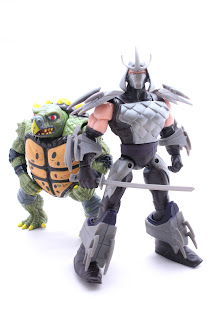 This is also one of two Shredder toys in the first wave of Nick TMNT. It should be noted that a second 'Sound-FX' version of the Foot Clan leader depicts him a little stockier, bears longer arm blades and has a cape. Aside from these differences, both Shredders look pretty much the same as the TV show design.
I've come across many a Shredder toy in my 20+ year experience of TMNT figures. Some are reasonably good, and some are pretty bad as a basis of comparison. Despite certain setbacks, this one is a keeper. It is not 100% perfect, but it has succeeded in pushing the envelope a little further in how Shredder as a figure should be made.

A further step up the ladder has definitely been taken. 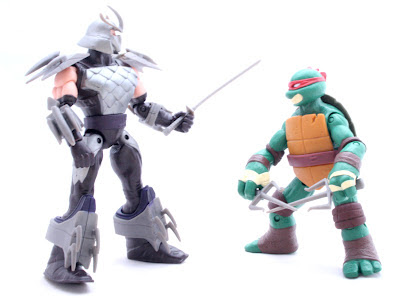