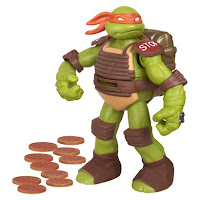 The Turtles 2k12 line is expanding, and like with past renditions of the action figures there are the whacky variants that fill up the range quite nicely. Gimmick-based Ninja Turtles are an acquired taste, in which some are fun and some are just downright bonkers!

These new Flinger Turtles have a shooting gimmick. They launch projectiles and look like they are throwing them too.

First off, Mikey is not really much in the actual action figure department. Most of his joints aside from the arms and head are static and don’t move. The lack of articulation is to make way for the inside mechanism activated by sideways wheels at the bottom of the feet. Anyone who did not like the static bent-knee battle poses on past TMNT figures may not like this at all, but the toy at least stands properly. The idea is to scroll the standing Turtle on a flat surface starting from left to right to make it fire.  The Flinger figures are a bit larger than the average range of TMNT.

The Flinger Turtles are dressed up in home-made junkyard armour (like 2003’s Fightin’ Gear line), complete with ammunition dispensing backpacks. Michaelangelo’s armour is made up of Stop-Sign shoulderpads and what looks to be old baseball catcher padding. 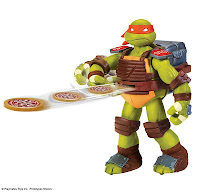 This Michelangelo is sans-Nunchaku, but made up for with 10 rounds of mini pizza projectiles (scale-wise, like a toy version of those small, undesirable Tesco Value range pizzas *bleugh*). Out of the Flingers Mike and Leo don’t have their signature weapons, but instead 10 rounds of disc ammo, whilst Raph and Don have their Sai and Bo but only 3 of a-piece. Leonardo’s disc ammo is a selection of mini-manhole covers (I think hubcaps would have made more sense). The pizzas which slot into Mikey’s backpack fire out from his waist (akin to the classic 1994 Pizza Tossin’ gimmick) next to where his right hand is default positioned, and in turn moves in a Frisbee throwing motion when launching.

I have produced a small video demo of the firing gimmick on Michelangelo, A random selection targets were found and used. Some of the faces may also be familiar…


The Flinger gimmick is just a gimmick at that. There is no direction, story or objective except for simply fire stuff and leave the targets to the imagination. Some cardboard enemy cutouts with stands would have added more to each Flinger Turtles. The potential is there for a pal and a second Flinger Turtle to invent some sort of 2-player shooting game shenanigans. It all revolves around finding a flat and sizable surface around the house or elsewhere. 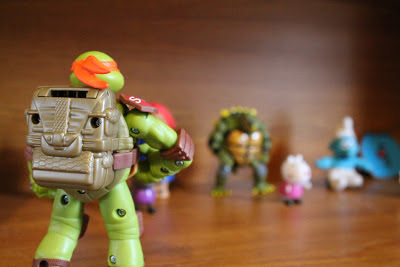 All in all, a fun tabletop toy to cause havoc maybe at dinnertime with, but the individual scale sets it aside and out of place from most of the TMNT 2K12 line. In addition, Flinger Michelangelo is not really a figure, but more or less a ‘missile launcher’ in the shape of one.  Like with the Ooze Turtles before, Mikey (and the others) are a gimmick and don’t go much beyond just that. Still fun though. 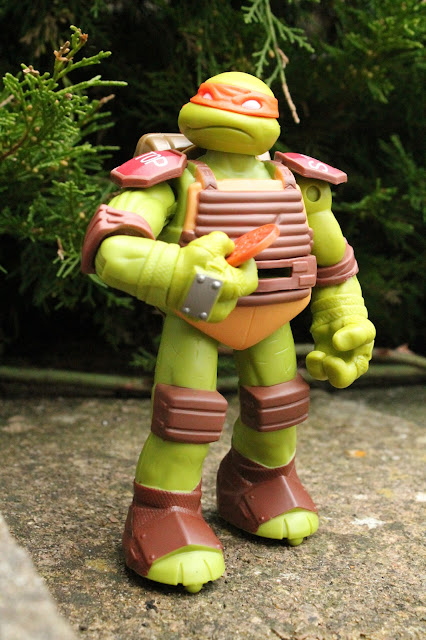