Dinosaur Train has been around for quite a while in the United States. Aimed at the Primary school demographic - its all about dinosaurs learning about other dinosaurs via trips on a train ran by dinosaurs *phew*. Dinosaurs riding trains? Its one of those bizarre concepts that is best accepted on its own terms and enjoyed for what it is.

The Henson/Learning Curve property has now become more established on the European side of the Globe with re-dubbed edits of the CG TV Series, so that the dinos sound more 'British'.

My daughter loves this show, and whilst out on a trip to the toy shop she immediately picked up on the new Dinosaur Train display. I could not refuse her,. She returned home happy with the acquisition of two of the smaller packs of 3 dinos bundled together. 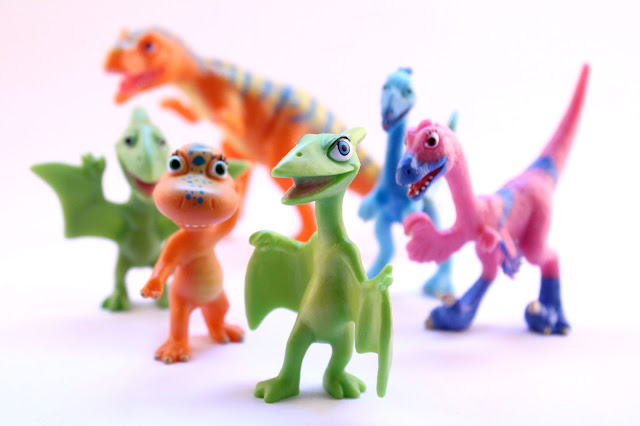 These smaller 3-pack assortments are priced at £5 each and the statically posed figures are very well painted and good quality. These are very collectible and I am sure more will come our way. The smaller assortments are alternatively 1 dino and a train carraige, in which parts of the Dinosaur Train can be collected and joined together.

There are also bigger Dinosaur Train toys with all the light & sound trimmings, but this pocked money wave is seemingly where the pound (or currency of choice) spreads the furthest.