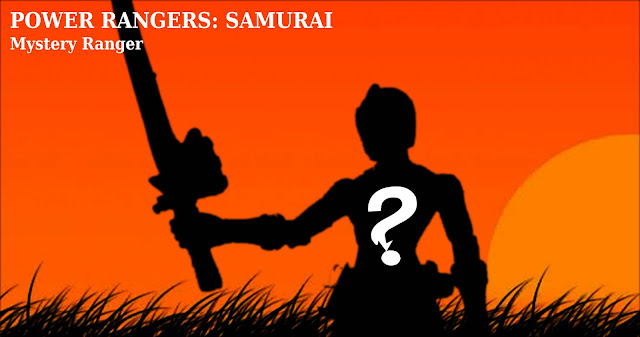 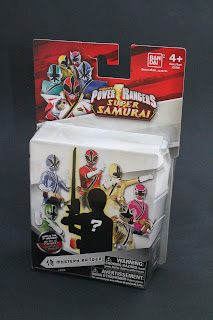 Power Rangers Samurai - the American adaptation of Shinkenger and 19th season of Power Rangers has made its presence known in toy aisles everywhere since the show launched in 2011. This colourful, sword-slicing incarnation of the Power Rangers has reawakened the brand after a year-long hiatus and looks to have been a success for Bandai.

Having a samurai group rounded up to 7 members just seems right. The latest member making up this ‘magnificent Samurai 7’ is presented in toy form with a gimmick. This characters toy packaging is shrouded over with the identity covered until opened. This stunt is something rarely executed on blistercard action figures and most notably witnessed in 1992 when Tiger Toys used a similar promotion to reveal the identity of Dr Claw within their Inspector Gadget line. 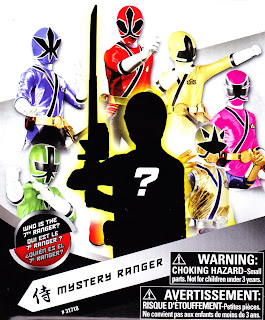 For those in the know, this ‘Mystery’ Figure bears little mystery to begin with. The packaging already indicates that the content is a Ranger which narrows it down to who it may be. Could the new Ranger be: Skull’s son Spike? Mr Brown? (see Japanese series) Or maybe Mentor Ji? Speculation can be fun.

Anyone who has watched the 2 season entirety of Power Rangers: Super/Samurai will already suss out who the covered up character is. However, the presentation and execution are a commendable effort. This probably won’t go down well with collectors who like to check for quality paint jobs. Companies can’t please everyone! 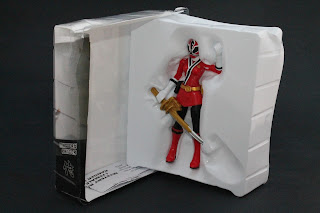 Open the blistercard – lo and behold… It’s a Female Red Ranger! Lauren to be precise! Viewers of Power Rangers Samurai will recall in the storyline that she was originally lined up to be group leader. The toy leaflet included (pictured) has a character profile of Lauren printed on the back explaining everything for fans out of the loop.

The figure itself is basically a female incarnation of the Red Samurai Ranger. The fire-kanji helmet design is exactly the same stuck on the female body sculpt design used for yellow and pink. This is quite simply a retool /repaint of existing figure parts poached together into an official custom.

Other ranger incarnations have rarely had a female at the helm; with Time Force/Timeranger lead by Pink, and Alien Rangers/Kakuranger fronted by White. Power Rangers SPD originally and briefly debuted the idea of a female Red Ranger via the leader of the turncoat A-Squad Rangers group. Shinkenger/Power Rangers Samurai most recently pushed the envelope further by using the storyline twist of Red Ranger Jayden turning out to be a decoy leader for his older sister Lauren. Surly, this innovation in Power Rangers/Sentai history deserved to be given an action figure and rightfully so it did. 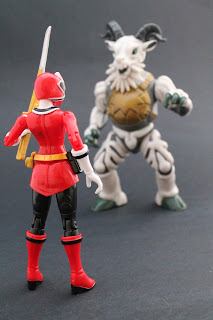 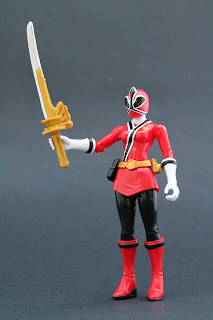 As a figure, there is no difference from the rest of the basic Samurai Rangers assortment: Same articulation (moveable head, shoulders, elbows, legs and knees), scale and basic weaponry (Spinsword and side hilt). Lauren does not have a signature weapon like the other Rangers.

Girl Rangers fans will probably like this set the most, considering the obvious rare occasion of a female Red Ranger and another girl team member in general. Here’s guessing this figures popularity all depends on how fans liked the Lauren character from the TV show, considering her tenure was but a short one. A 7th Ranger stretch is a rare anomaly too and more Rangers is always good!

As of this writing, the 7th Ranger Mystery set has only been found in UK retail.  Perhaps Bandai wanted Great Britain to have a special figure, an exclusive that could have easily been an overpriced convention premium. An American release for this toy could still happen.

So there it is - a simple figure with no extra frills that is specially presented. A neat idea while it lasts 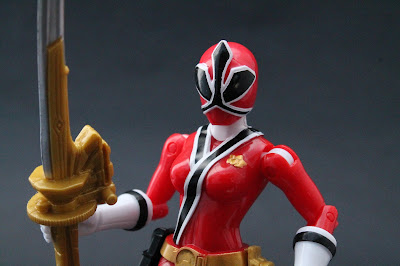