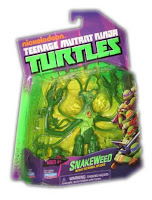 
Making his debut in the pilot of Nickelodeon TMNT is the original character – Snakeweed!

Snakeweed joins the likes of Evil-Seed, Poison Ivy, Saw-Boss and many more in the alum of Botanical Baddies. This character concept for a ‘Turtles Villain’ is far flung from the rest. 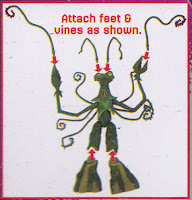 Originally a ‘snitch’ named Snake, this unfortunate street-thug had an accidental encounter with some Kraang Ooze that caused him to mutate with a plant motif. The name Snake-Weed was mockingly given by Michaelangelo (who went on to christen the subsequent villains that cropped up every week).

The first thing noticeable about this figure is that Snakeweed is packaged minus the lower legs in place. The legs along with a dual-antennae and a couple of vines can be attached to completely assemble the figure. The vines are not only extra/chopped-off limbs, but also act as hand weapons. They are optional. Do take note that the legs are not easily un-attachable, and stay stuck quite easily. 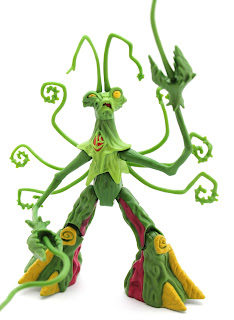 With everything together, Snakeweed stands at a near 6-inch scale. Whilst the scale still doesn’t truly represent how big the character can be from the TV series, it makes sense for the sake of ‘sparring’. Anyone who follows the show on Nickelodeon will know Snakeweed can be cut down to size, to coin a phrase.

The design is overall brilliant for this cartoon villain. Snakeweed has a simple yet effective colour palette, good sculpting detail (such as his exposed seed/heart) and a face like a smacked backside. Near enough show accurate for a figure of its assortment class.

In general, Snakeweed translates very well from animation design to action figure. The toy could have maybe been bigger but Snakeweed manages to cut some corners and stand out. Certainly as of this writing, the best ‘support cast’ toy in the TMNT line so far. 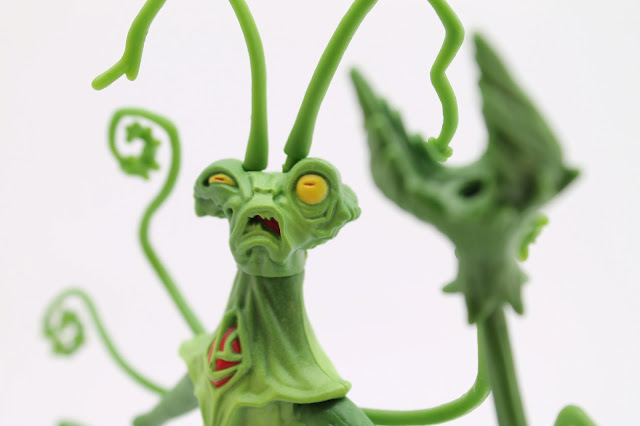