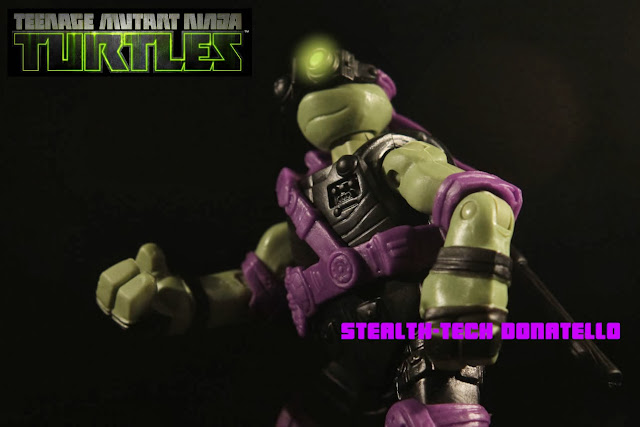 This gimmick however is not just about the Turtles in black outfits; it is about the extra tech they come equipped with. So with this review, a top Turtle amongst the 4 was chosen as his character suited this theme the most – Donatello! (Don being the techie turtle and a pupil in the art of Ninjutsu).

The concept of Stealth Tech had been executed similarly (and loosely) before with the 2007 Fast Forward line releasing ‘Secret Agent’ Turtles, of which only Donatello was found as a UK Woolworths exclusive (and the others unproduced). Another ‘black ops’ idea was used the first wave of the 2008 Mini-Mutants range, depicting the Turtles in black jumpsuits and nothing beyond that.
This look made an appearance in an episode of Back to The Sewers (2008). 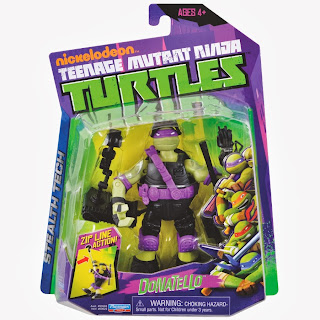 The first impression with this figure is a good one. Not only is Donnie dressed up for some sort of covert mission; his look is near accurate to his design in the Nickelodeon TV show (e.g – more square-like fingers, shape of head etc.). Like most new Donatello toys based on the show, his mouth is closed probably to conceal his gap toothed grin, but still has a good serious expression to scare bad guys with. The head-sculpt is also topped-off with flip up night-vision goggles.

The action figure sculpt is seemingly more solid looking which could be attributed to adding clothing into the mix (with extras like elbow/knee pads and boots). The old saying ‘with nobs on’ is very suited.

The toy mainly being in black is a possible money saver on Playmates’ part in staying within a limited colour palette (Green, Purple and a dash of white). The black body armour which covers Donatello’s back shell and front plastron is detailed with lots of small pouches and pockets, as well as a few buttons. The look is also layered off with a purple utility belt with a communicator and climbing rope moulded in. Perhaps as of this writing, Stealth Tech will feature in the show.

As a small bonus, the Stealth Tech (and reportedly other subsequent releases) all have exclusive cheat codes for the upcoming Teenage Mutant Ninja Turtles video-game. Information on the packaging is given to say what the cheat code is for, but does not reveal the code. The codes are printed on small full colour leaflets only accessible when opening the figure. ST Donatello’s packaging advertised a cheat for infinite shurikens. We respectfully won’t reveal it here. 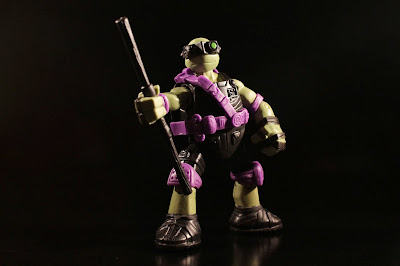 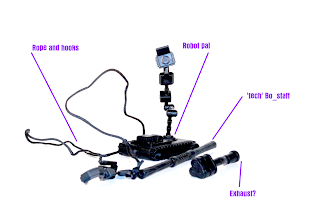 The ‘Tech’ assortment for Stealth Tech Donatello consists of a ‘Tech Staff’, a zip-line, a spy robot and what appears to be some sort of strange mystery exhaust pipe accessory that doesn’t seem to have any purpose or explanation on the toy packaging.

Donatello who builds technology and yet chooses to fight with a wooden stick now has a black ‘tech’ version of his signature weapon. This version of the bo-staff looks like it has a middle handle in which two ends extend from either end. The robot, (which looks like yet another cultural nod to Johnny 5 from the movie Short Circuit (1986)) is pretty much a sidekick bonus figure and near enough an old-school throwback to when some TMNT toys had ‘assistants’. Hopefully, this is the case and more ‘sidekicks’ will crop up.

The last but not least in the Stealth Tech arsenal is the zip-line. The opportunity is there for this figure and the other 3 (who also have ropes w/hooks) to abseil down a bunk bed or wardrobe James Bond-style. The Stealth-Tech idea is a good one, and is something that makes sense to the ‘Ninja’ Turtles formula as opposed to only constructing variants.

The Stealth Tech variant of Donatello is seriously recommended as far as Turtles figures go. Not only a skilfully chiselled and toon-like toy, but also kitted out well with some fun meaningful accessories (even if one of them is unexplained) that really make it fun. This version of Donatello is a good take on the character and a step up on previous toy variants based on him. 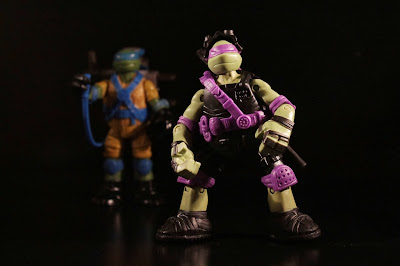 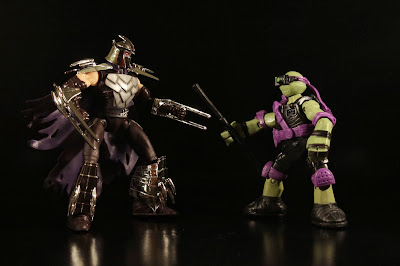