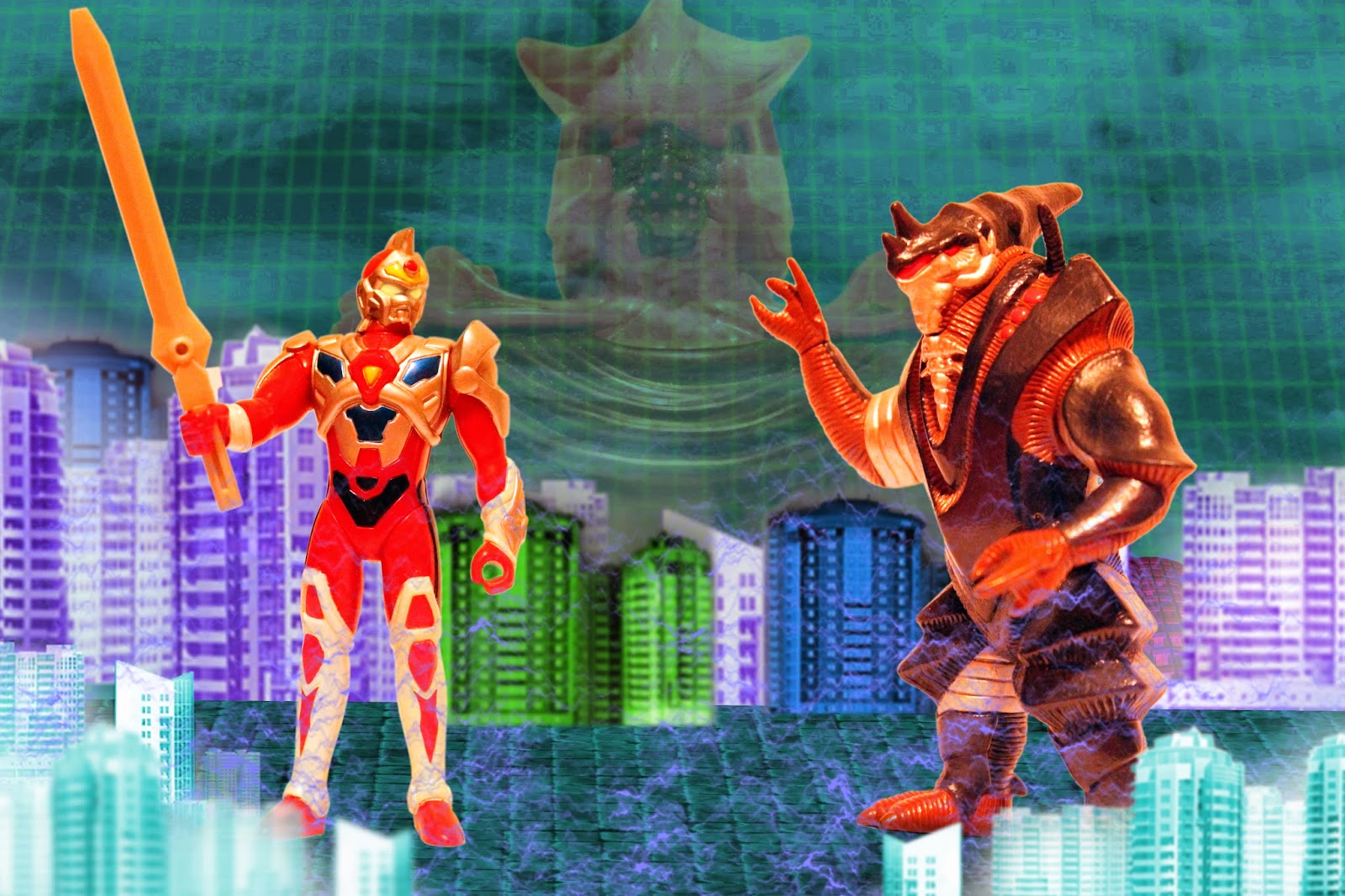 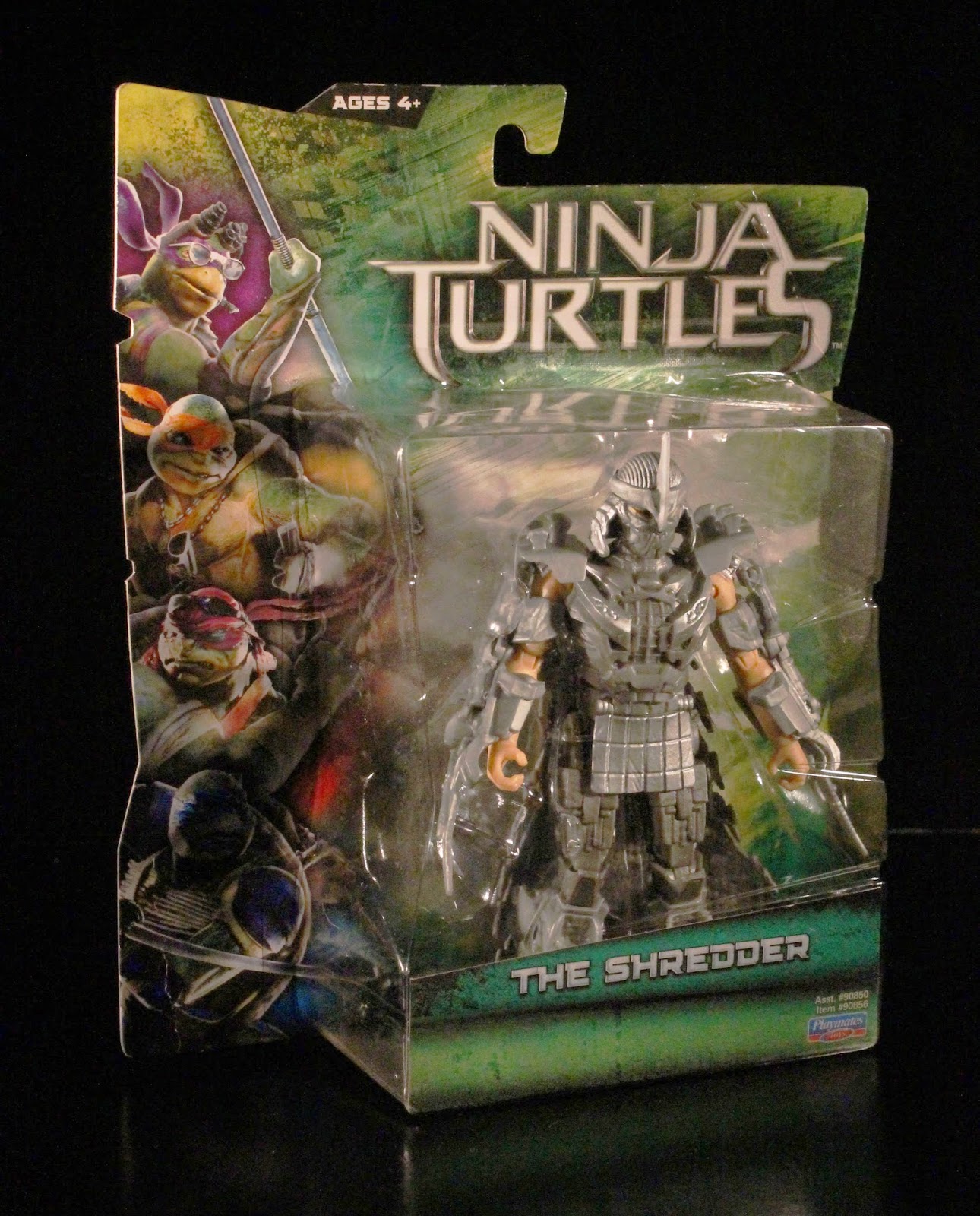 Over the years, Shredder action figures have been hit or miss depending on what someone is looking for in a toy based on the TMNT primary antagonist. Bubblecard branded 'The Shredder' is based on the character depicted in the upcoming Ninja Turtles (2014) movie. Complete with kabuto, butch body plating and blades, this is easily recognisable as Master Splinter’s arch nemesis.

The design is executed as stocky exo-armor for an otherwise less stocky suitor (Eric Sachs). Head to foot, the character looks metallic and mechanical with pivots and robotic panels. The suit has an incredible amount of depth and detail with even the detachable cape looking like it's made from chainmail with razorblade edges. The faceplate up close has a fearsome touch of skeleton teeth engraved in. Apart from his inner (slightly puny) arms, The Shredder is almost entirely covered in metal. Almost untouchable! 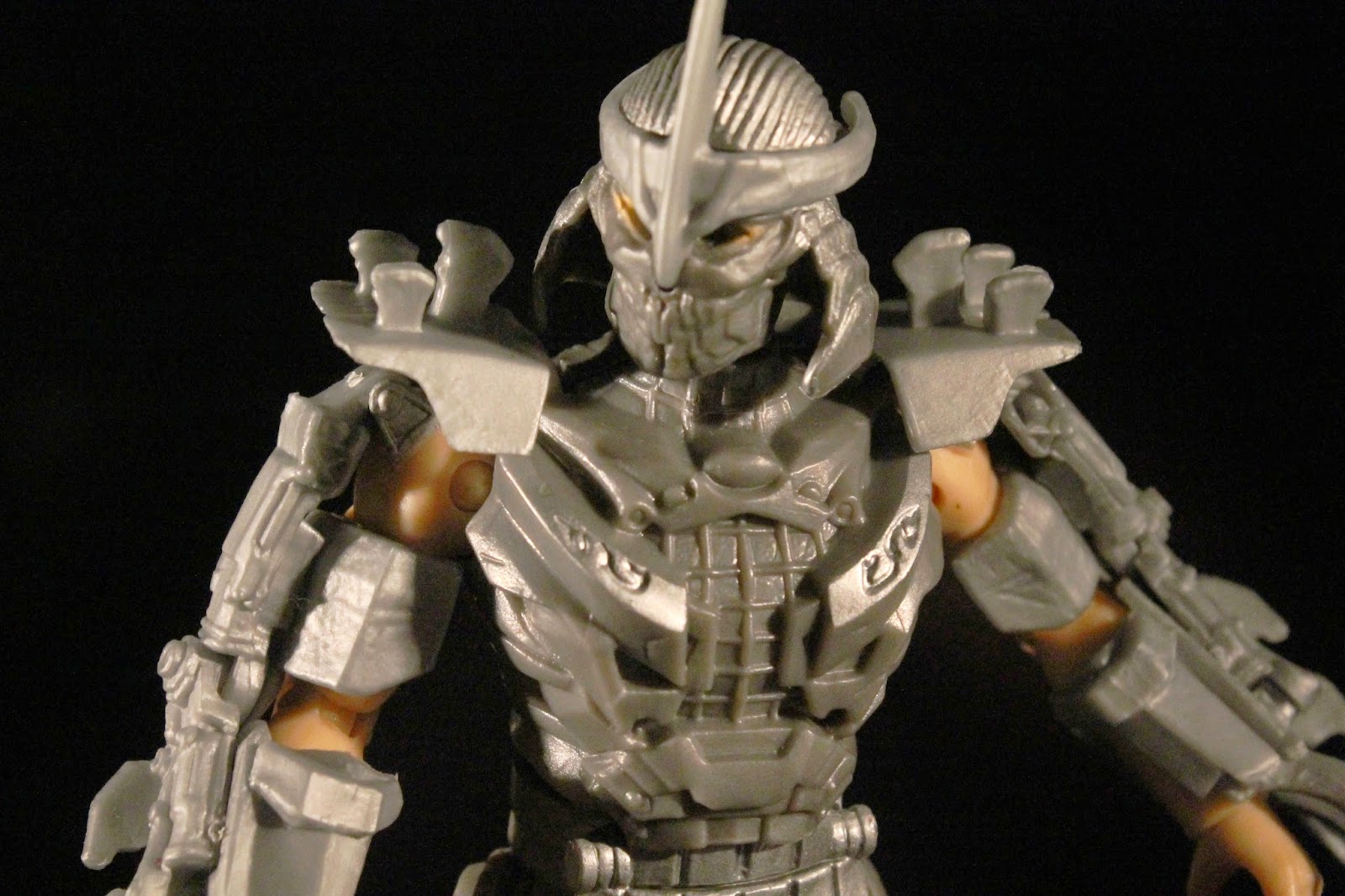 There is a fair amount of articulation with arms and legs sporting three points each (including bendable knees, elbows, shoulders and ankles) and a swivel waist. As with most figures, the head typically can be turned from side to side. The iconic helmet is not removable and is part of the sculpting.

Whilst this is a great looking, detailed Shredder figure, it is difficult to stand up which is a grave flaw. The chainmail cape (made from rubber) helps prop up the figure. In pictures this drawback is hardly noticeable, but it does mean the toy is reliant on its only detachable accessory in order to function as a model. 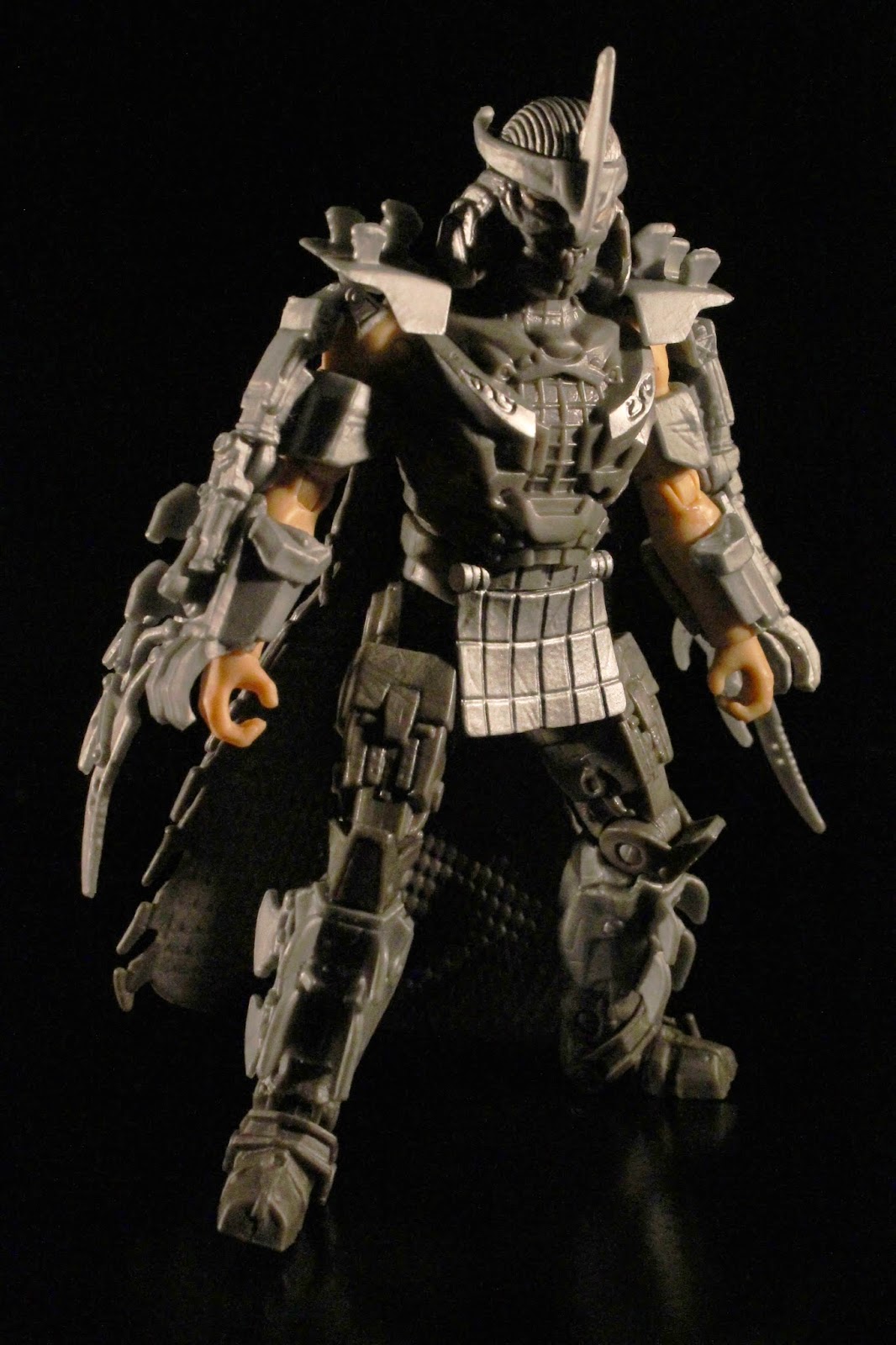 Aside from the razor-cape, this version of The Shredder does not come with any additional weapons as past toys have. Perhaps the idea behind this over metallic version is that he is The Weapon!

The colour palette on The Shredder is a basic grey shade medley, some chrome and a skin tone where flesh is rarely exposed. It does the job well. No purple, blue or magenta as on past incarnations but a real world tone instead. Up close, the eyes are a couple of beady black dots seen past the faceplate that are kind of creepy, but add to the meanness radiated by this character. 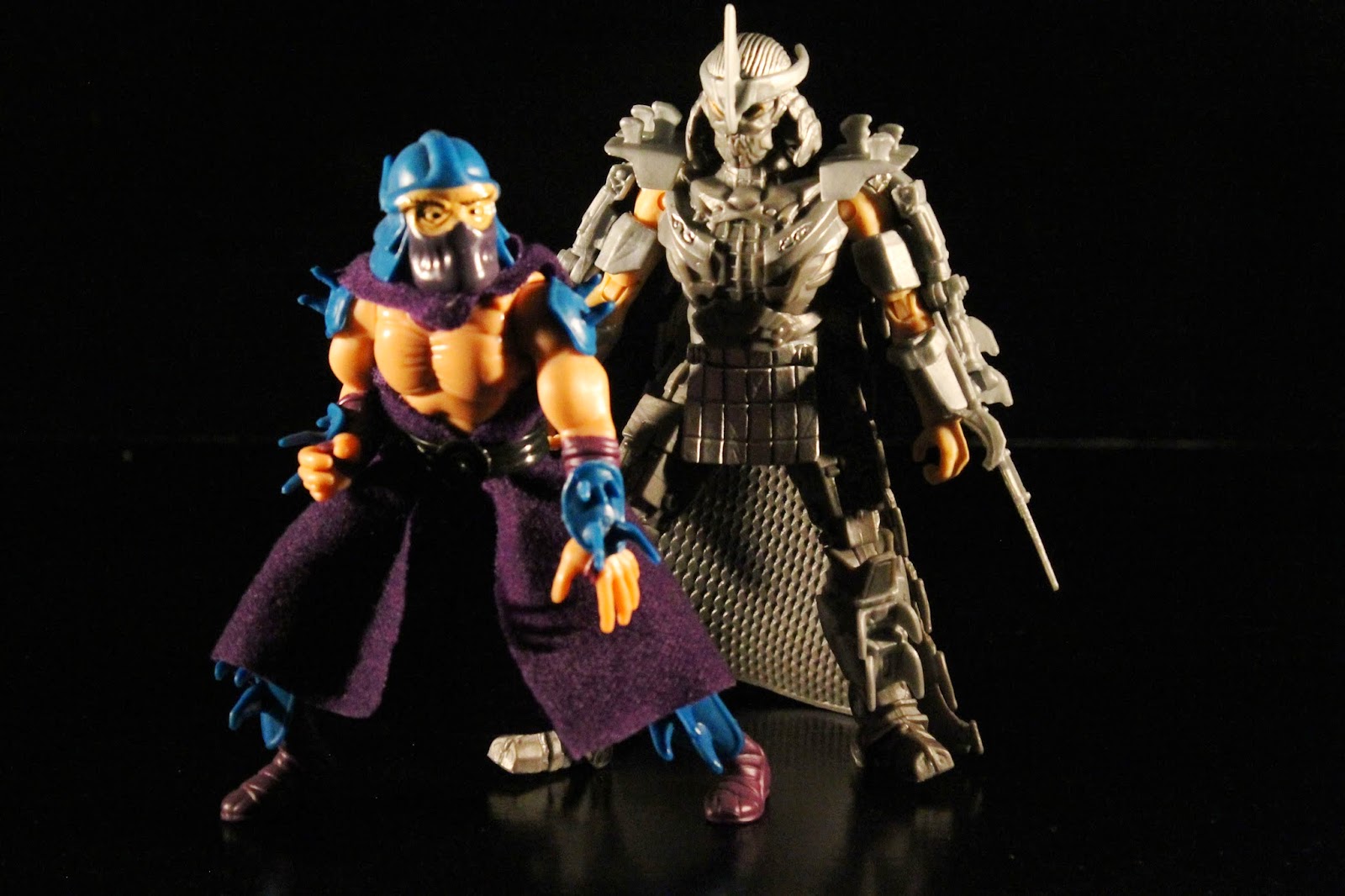 All in all, The Shredder is a good wave one effort that may end up surpassed by possible later variants. The standing problems are an issue for display purposes, but not so much for play value. At the time of writing the movie has not yet been released , so judgement on how well the movie character adapts to plastic awaits further scrutiny. At this point, the toy acts as a preview to what movie-goers should experience with The Shredder’s appearance in the fresh silver screen reboot. A lot of mean metal awaits! 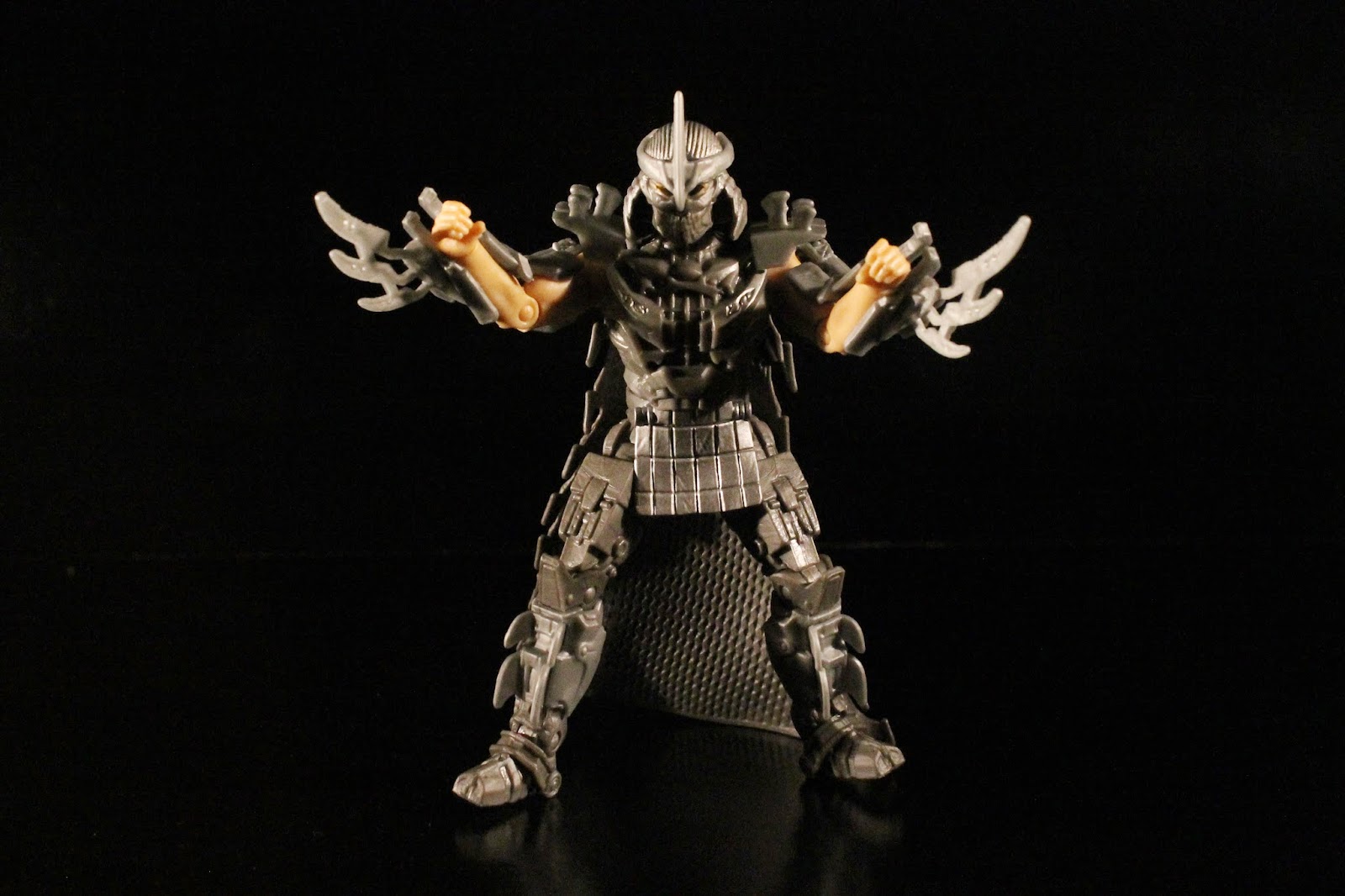