Michelangelo VS Rocksteady is one of 3 action figure VS packs exclusively available at ASDA stores across the UK. Each set features a repainted or retooled Turtle with an also repainted sparring partner.

Going by the profile on the packaging, the theme of these random repaints is to ‘create your own battles’ between the selected match ups. This is a simple yet good setup for first time Turtles figure buyers, especially kids looking for something to clang n’ bang together.

To start we’ll break down and take turn with each figure: 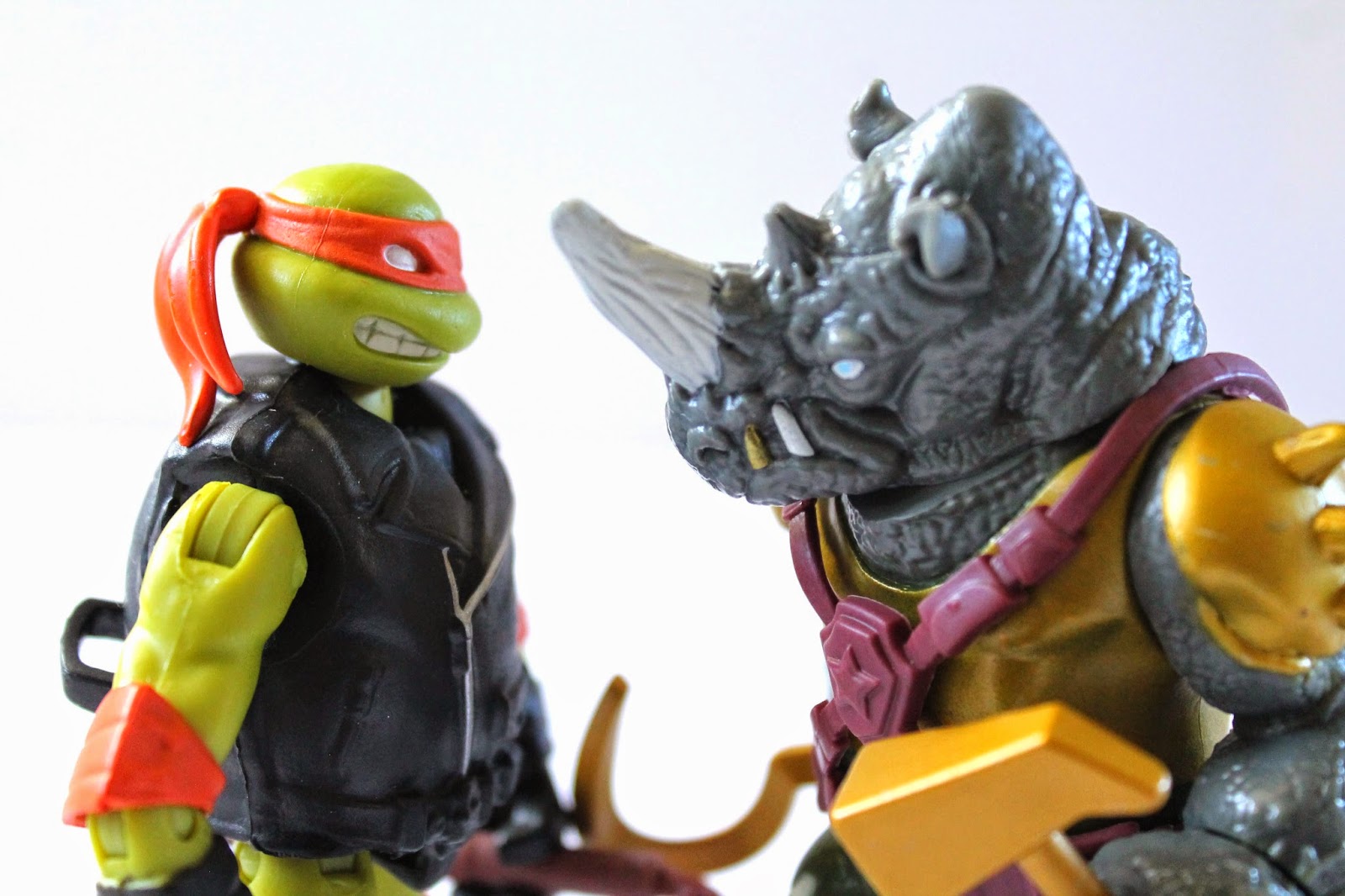 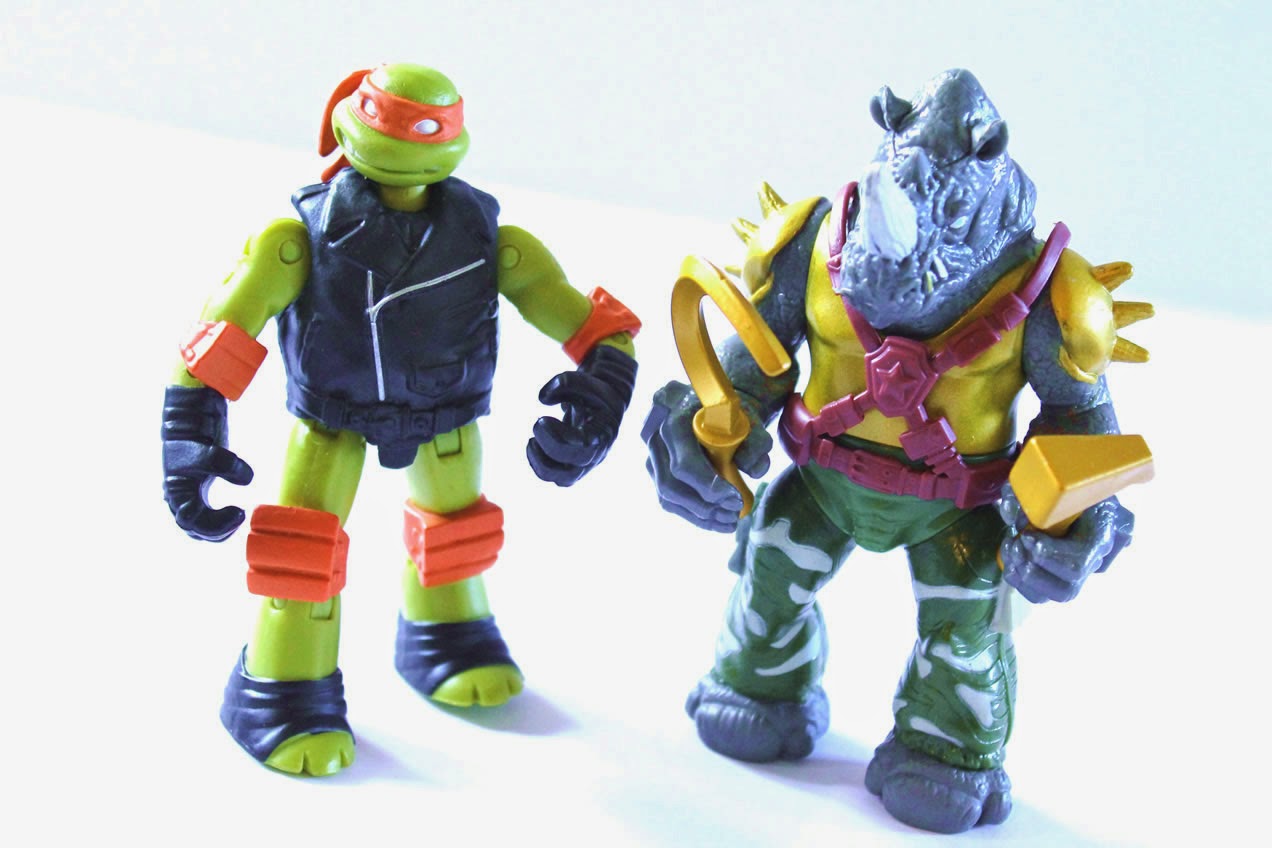 Although being a repaint, this 2-pack Rocksteady received a UK release before the original figure (Same for partner in crime Bebop). The original Rocksteady has already been seen in two variants, making this UK-only release the third version of the figure. If this was a catwalk it could be described: Playmates have taken the gold-ish colour from the shoulder pads and used it for the tanktop and hammer/sickle weapons. In addition Rocksteady is also sporting a claret coloured bandoleer for any occasion.

Michelangelo is a repaint of the figure packaged with the 2014 Hot Rod vehicle. The main difference is the head has been swapped around with that of the original 2012 wave 1 toy - The result being a Michelangelo wearing a ‘Negan’ jacket and leather riding gloves for reasons unknown. This figure dressed in racing leathers was originally designed to coordinate with a souped-up motor car, so seeing this alone with a different head sculpt is a little amusing (see comparison photo below). Mikey also comes equipped with a coffee brown repaint of his nunchuck set. 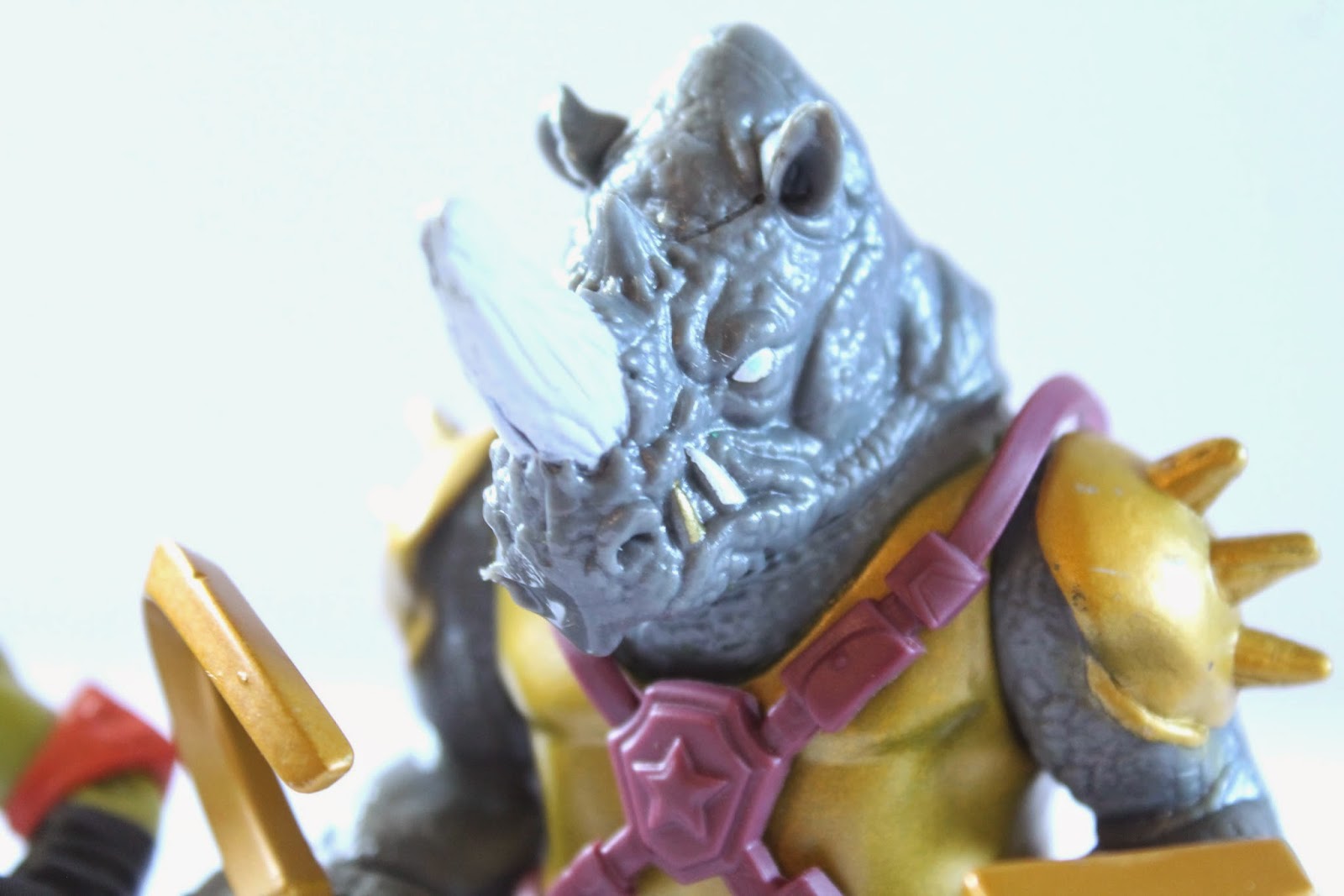 The pictures tell it all at face value. This is a strange set from out of nowhere, but also a fun idea at the same time. The set like the other two first greet you with both figures positioned in a head to head battle pose from each side about to clash. In that respect; this is one of those action figure sets that are worth keeping sealed, displayed and never opened. The mixed appeal is there for either collectors or kids. £15rrp for two figures together from the basic assortment is a fair deal. 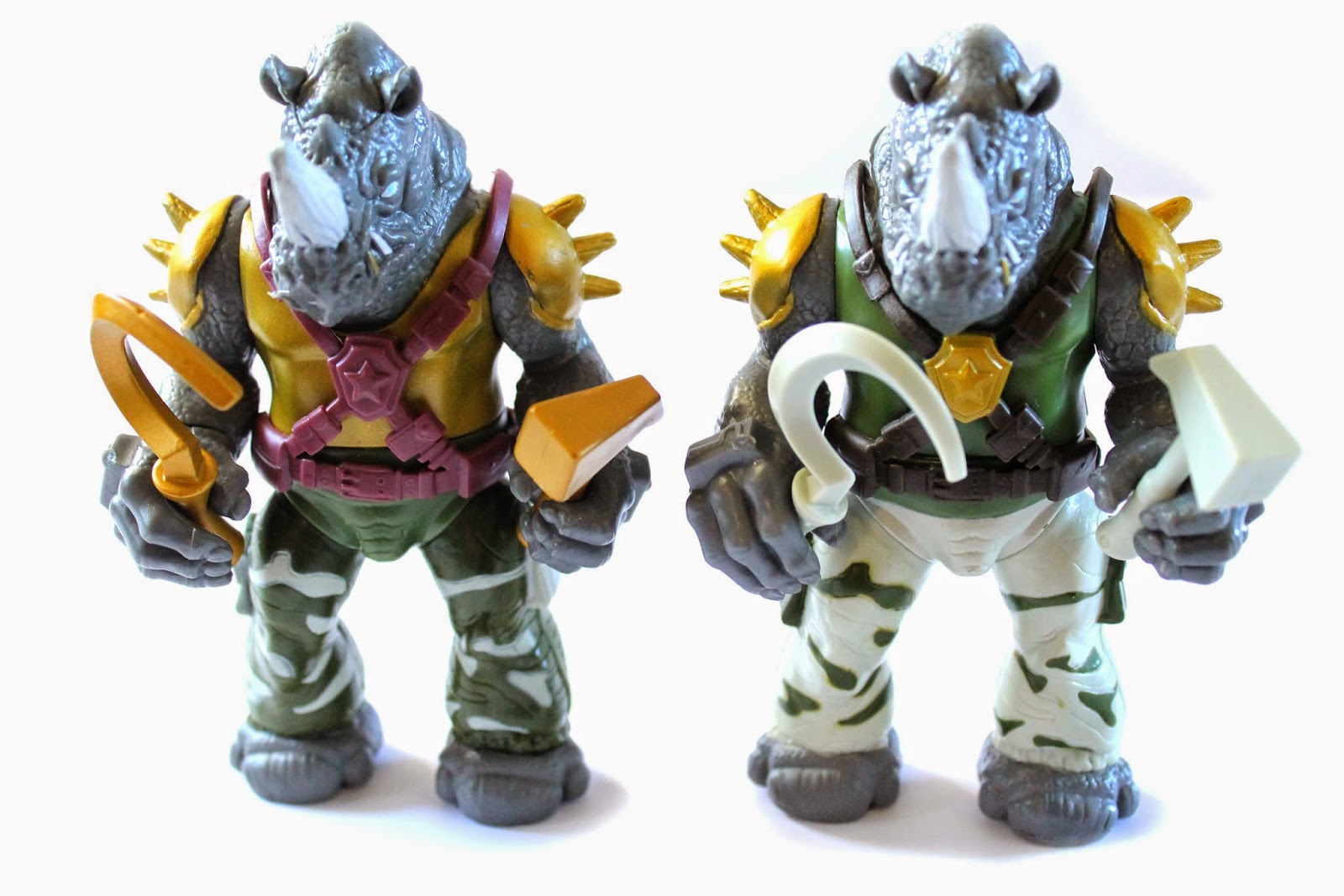 If you like repaints and love variants (no matter how pointless), these are worth grabbing. The obvious thing going for these sets is that they are UK exclusive and something hardcore collectors (who even don’t mind Playmates reputable poor use of colour on toys) will want to get ahold of. 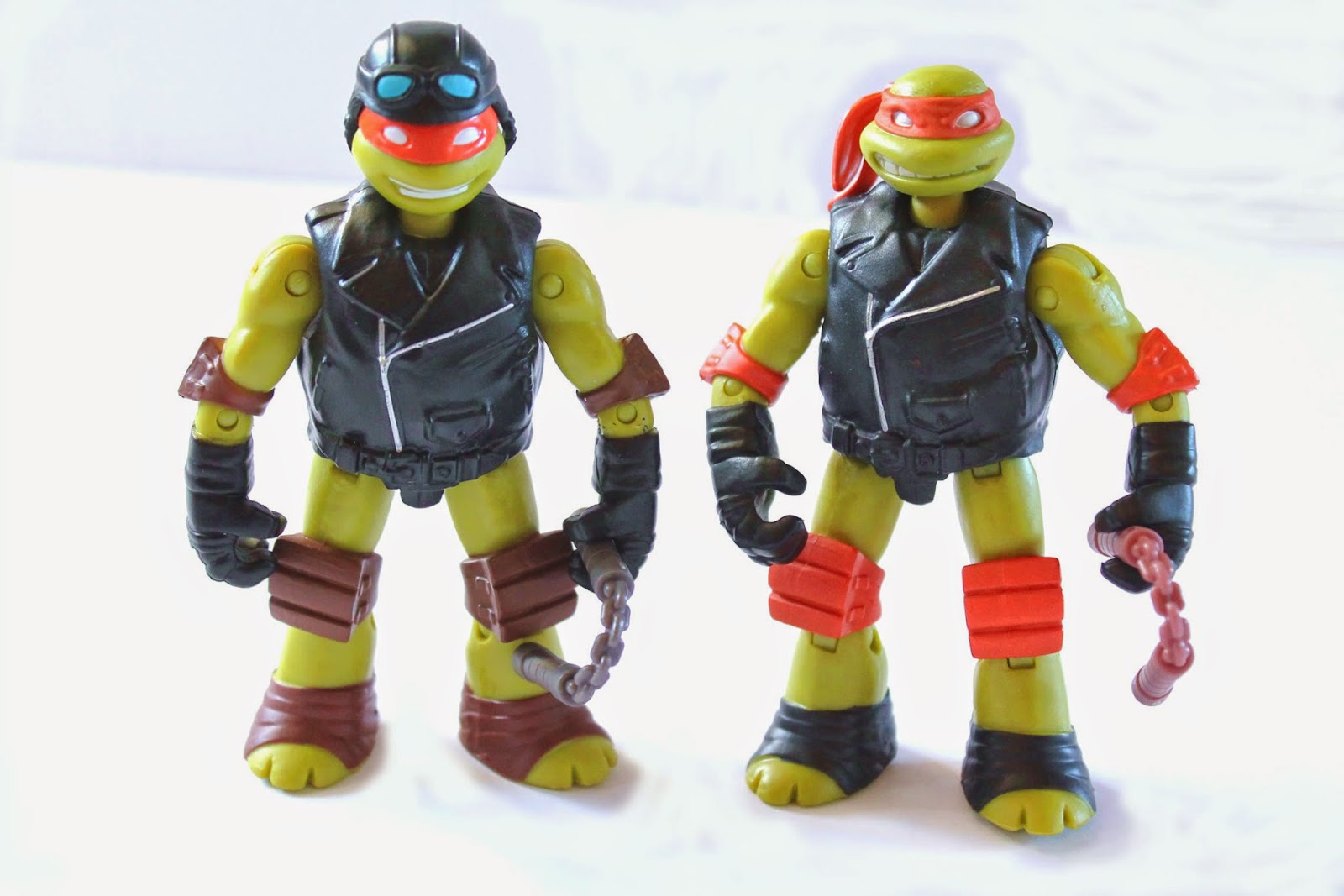 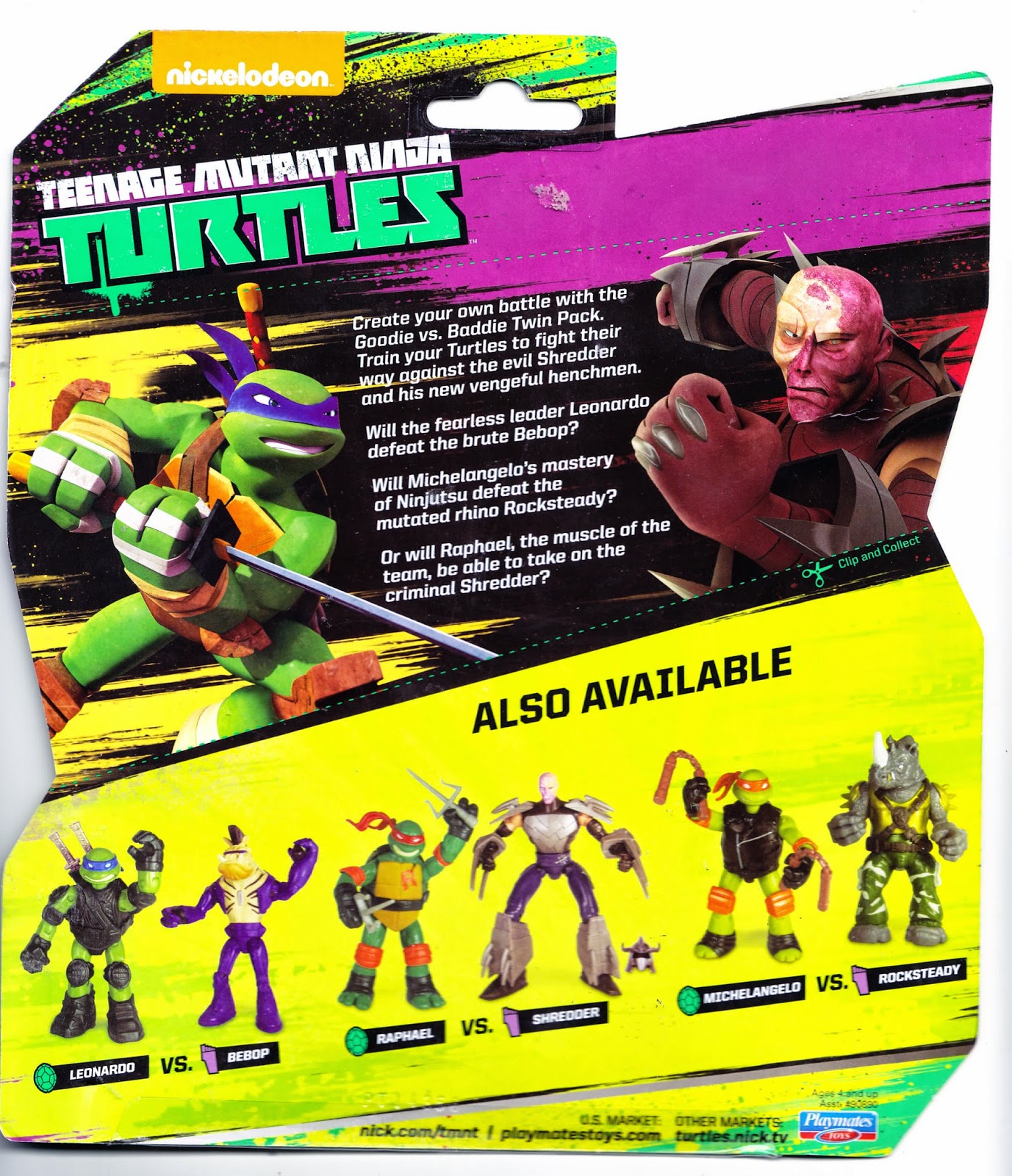