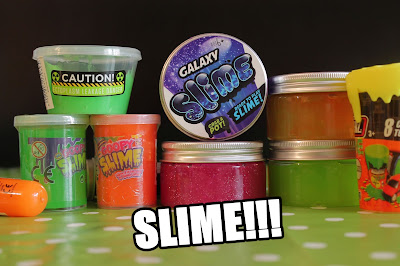 Slime is becoming a popular plaything again. The fun days of Ecto-Plasm and Mutagen are back, but with a broader variety of colours and brands available.

Just for kicks, we’ve randomly selected some toys to go with an ensemble of slime recently purchased from various stores - and photographed the lot!

Anyone would think this blog has run out of ideas! We’re certainly scraping the bottom of the barrel to coin a phrase. So here goes… 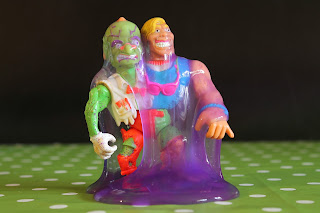 Toxic Crusaders is naturally a slime themed toy range, featuring characters drastically changed and deranged one way or another by radioactive goo. Headbanger was a perfect find without having to dig out the archives too much. 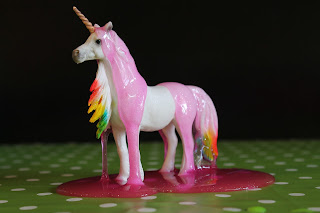 Unicorn-themed anything has been a huge request on letters to Father Christmas over the last year. A perfect toy pairing, as slime has become trendy at the same time too. 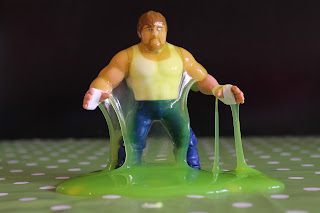 Given his ventures with Nickelodeon, fellow grappler John Cena is no stranger to a slime party! On this occasion, it’s time for another WWE star to model a slime overcoat. Dean Ambrose was first out of the wrestling box! Give the Lunatic Fringe a mop and he could pass off as a pre-mutated ‘hideously-deformed-creature of the super-human size and strength’ who hails from Tromaville! 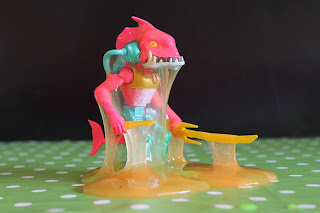 This is the USA exclusive repaint of Fish-Face who I like to dub Disco Fishface because of the wild new color palette. Orange is the colour used for retro-mutagen in the 2012 version of Teenage Mutant Ninja Turtles, an antidote version of the Kraang ooze that reverses mutations. I always thought the character Xever before he became Fish-Face was pretty cool and wanted to see him return. Alas. 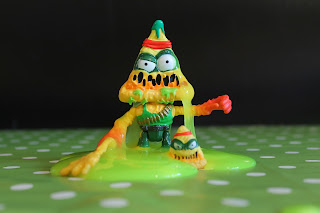 Another line of toys suited to sludge is this anthropomorphic rotten food range. I went for some extra cheese and chose a yellow slime overcoat for this modern-day Food Fighter. 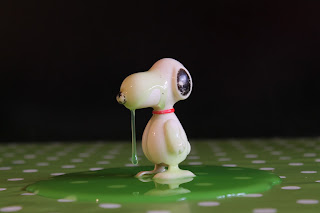 Looks like Charlie Brown’s best friend has a very bad cold. I threw this entry in to bulk up this already filler article.

All the slime in this feature was purchased at either Poundland, Home Bargains or The Entertainer. This is all the signs of pocket money well spent!

Email ThisBlogThis!Share to TwitterShare to FacebookShare to Pinterest
Labels::: 2018, Slime