Back in ‘them old days’ Hasbro ‘WWF’ wrestling figures were a popular selling brand. The company’s representation of Hulk Hogan and co were not the greatest toys ever by some standards; but had a real charm to them and never failed to capture the character of the wrestlers represented.


These toys were basic and repeated sculpts aside from an individual head, with little articulation and an added posed-play feature (be it a swinging arm, spring loaded ‘Ram Man’ style jump, or swivelling waist punch/clothesline). These were fun toy wrestlers that could be clashed together to re-enact classic matches as well as fantasy new ones.  Many years since, the WWF… or now WWE toyline has been handed over, evolved and changed around featuring more realistic looking and articulately larger-scale figures as a result. 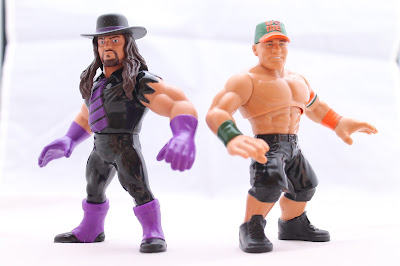 Mattel who currently call the shots with everything WWE toys have taken a trip back in time by creating a sub-range of multi-era alumni figures in the old Hasbro style. This means that nostalgic collectors who kept their Hasbro wrestlers from the 90s can extend their roster, and the kids of today can experience the same charm these no frills toys presented more than 2 decades ago. The later waves of these retro figures have an additional WWE Mayhem phone app feature to give these new ‘old Hasbros’ a modern-day edge. The edge being that the QR code included will unlock the wrestler as a playable character in the WWE Mayhem game.

The first two figures I managed to score from this line are John Cena and The Undertaker (wave 1). Two iconic grapplers that many a fan would love to see a showdown between at Wrestlemania! As I write this piece, Wrestlemania 34 is on the horizon and internet gossip is thriving that this once in a lifetime dream encounter will actually happen. 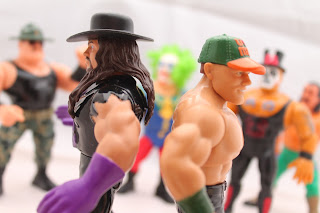 Unlike The Undertaker, this is John Cena’s first action figure in this throwback style. Like with a lot of Cena merchandise, he is depicted with wearing a baseball cap. This is not removable. The posed-play feature on this figure is the gorilla press slam position with both hands are open and slightly grasping. This position has been used before with the old Hasbro figures of Hulk Hogan, and Ultimate Warrior in which their arms can be pulled back and sprung forward to launch another figure put in place. This feature has been modified for John Cena, in which the pull-back feature is located in the waist. The waist can be tilted from side to side to launch another figure sideways in an attempt to simulate Cena’s finishing manoeuvre – The Attitude Adjustment. Might I add - It works very well! 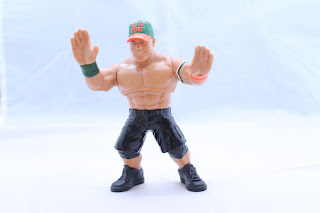 The Undertaker’s new figure is both a rehash and a new variant. This Undertaker is based on his ‘purple gloves’ look from the early-mid 90’s! Even though Hasbro already produced an Undertaker figure with this look, he is now additionally sporting the iconic purple/black striped necktie as seen on his entrance attire. 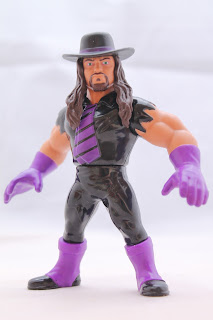 This new Undertaker also sports the ‘gorilla press’ battle-posed play feature but with the pullback arms lunging forward. That means no Tombstone, but with some imagination The Deadman can pull off a chokeslam or even a Last Ride. Then again, fantasy scrapping between plastic figures is up to the imagination of the holder!  Another noticeable difference this newer Undertaker toy has is the sculpted longer bangs of hair going past the shoulders, only… instead of solid plastic, the hair is more rubbery so the head still has some articulation. 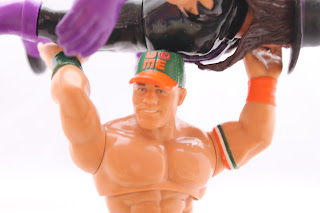 I can’t sing the praises of this retro initiative enough. It doesn’t look like this new line will finish anytime soon as more waves of these toys featuring present and past alumni are being announced by Mattel. Based on the happy purchase of these two early figures alone, I’d be happy to pick more of these up. This is Nu-Nostalgia done right! 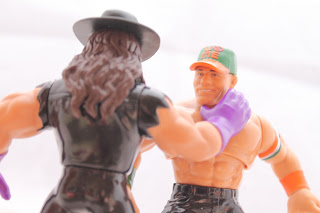 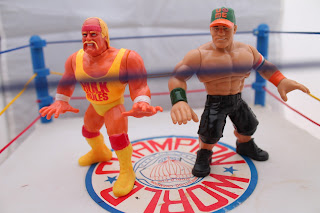 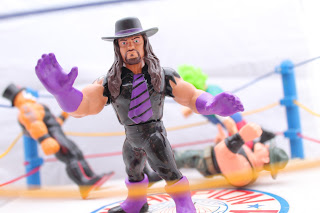 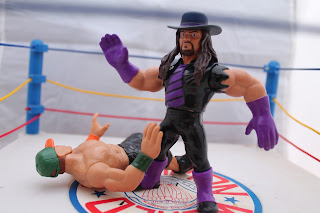 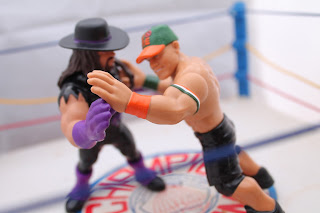