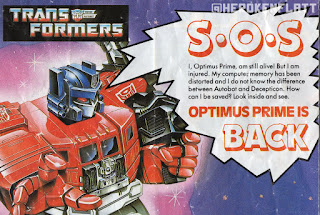 During the late 80’s Transformers had “The Masters” bulking up the toyline with sidekick Nebulons that changed into their heads, guns and engines. A brilliant concept that meant for the partnership of two toys one big and one small that generated extra play value.

“The Masters” had a great run and also meant for return of toys like Hot Rod and Cyclonus now paired with Targetmaster gun partners.

A big event during the run made for the return of the main bot himself Optimus Prime with a bigger and more powerful design after his demise in both the Animated Movie and Marvel Comic canons. The true Matrix Bearer was making a comeback to the toy shelves, and it was exciting!

Powermaster Optimus Prime, a beefier toy than the original Diaclone design that had a combinable trailer, a Nebulon wingman in “Hi-Q” and more arsenal than before.

It was a must-have toy that sadly I struck out with! Despite opening up a junior Building Society account to save for one - I made about £5.84 towards the £25.99 goal which was later drawn out in the 90’s towards buying a games console. It wasn’t until 2002 I purchased online the re-release of Powermaster Prime’s Japanese counterpart “God Ginrai” (Powermaster Prime with even more extras) that made the 14-year wait worth it.

Ironically, the purchase was the same price I could have paid in 1988.

Optimus Prime’s return has meant for promotional goodness! Hasbro UK launched a fun S.O.S campaign abreast of the already existing Robot Points promotion (where ‘collect and save’ coupons could be cut out from the toy packaging). The storyline behind this campaign is explained in the scanned images. Optimus has gone AWOL and lost his memory whilst exploring (like Autobot leaders do) and it is up to two opposing factions to get to him: The Autobot stable of H.O.P.E (Help Optimus Prime Escape) consisting of Hot Rod, Chromedome and Sureshot; or S.T.O.P (Search & Terminate Optimus Prime) featuring the Decepticon Gunner/Hypnotist tag-team of Triggerhappy and Mindwipe. 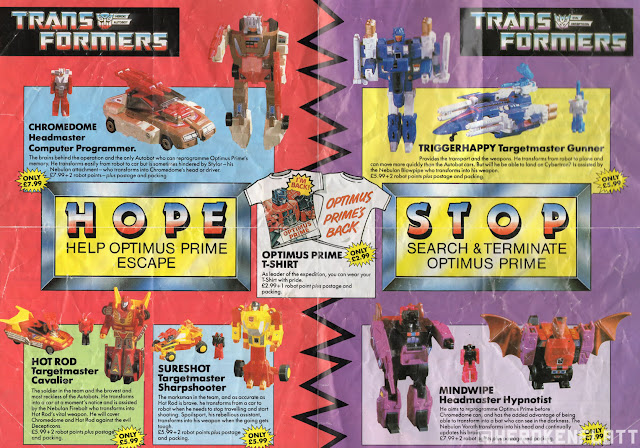 Any of these 5 Transformers could be purchased via mail away "Mission Enrolment" form on the promotional leaflet. Whilst these toys could already be purchased in the shops, the Robot Point coupons were like a pocket money shortcut to acquiring them.

Toys aside, the crown jewel amongst this promotion is the awesome “Optimus Prime’s Back” T-shirt. Featuring the box illustration from the Powermaster Optimus Prime toy accompanied by the text “I’m Back” on the front. This front design text validates that the “Optimus Prime’s back” behind design isn’t a shirt for Prime himself, but for a child at the time! 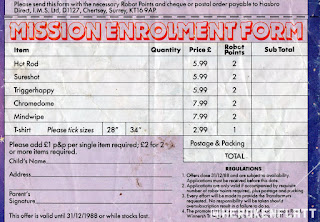 Looking at the screenshots, you can agree that It’s an awesome shirt that deserves a homebrewed homage reissue for those of us who have grown a bit since 1988.

Optimus Prime is the comeback king of the robot world, featuring in any excuse for Hasbro to release a new toy version of everyones favorite 'red and blue lorry'.  30+ years since SOS, there's been multiple Primes including a modern "Titanmasters" remake of the Powermaster toy - none of which have had a cool T-shirt costing a 10th of todays inflation backing it. Long Live Optimus! 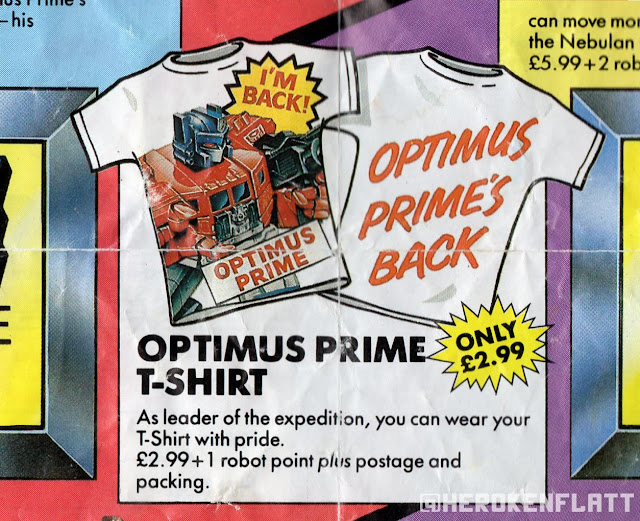